We’re jumping back into our What’s New series with another in-depth look at SOLIDWORKS 2015 features. Part 1 and Part 2 covered the 2015 interface and its updated sketching capabilities. In Part 3, we’ll dive into its fillet features, surface commands, patterning and more.

The latest update has a new way of displaying filets. Instead of a vertical list of words, SOLIDWORKS 2015 now uses a horizontal row of icons.

Now, you can create elliptical shaped fillets, otherwise known as asymmetric fillets. This feature is available for constant, variable and face fillets. 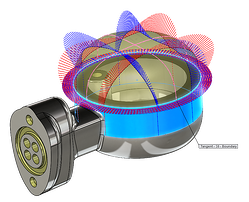 You can now display curvature combs on any face of the part. You can view the combs for both the selected face and adjacent faces. You can also adjust the scale or density to get a better preview.

Previously, if the sketch was open and you wanted to make a cut, the cut would go all the way through. Now, you can control the depth of that cut with a blind cut.

Creating Planes Parallel To The Screen

Maybe you want your section view cut at a certain orientation. With 2015, you can create a plane parallel to your screen. Then, you can use that plane to create a specialized section view.

You already have the ability to split a solid body into multiple bodies in SOLIDWORKS. In 2015, you can now do the same with surfaces.

Simply select all the faces you want flattened and pick a point where the flattening will begin. You can show a deformation plot to see the percentage of stretching or compression.

This is a command typically used with imported files. In addition to a blind distance, you can move a face up to a vertex, to a surface, offset it from the surface or up to the body.

Changing Features/Faces to Bodies in Patterns

Features and faces have been combined in 2015, while bodies have their own selection box. In addition, you can switch from patterning a feature or face to a body without having to recreate the pattern.

Fill patterns now display the number of instances as a result of the pattern. If you make any modifications, the number updates automatically.

Now that you know what these features do, watch how they work in our on-demand “What’s New In SOLIDWORKS 2015” webinar!