In the spirit of Halloween, my wife and I carved our pumpkin to create a Jack-O-Lantern last night! She scooped out the “guts” and separated the seeds, and I skillfully wielded our little orange handled saw to create the masterpiece we’ll display on our steps tomorrow evening. Thanks for reporting a problem. We'll attach technical data about this session to help us figure out the issue. Which of these best describes the problem?

Any other details or context?

As I arrived at work this morning, I couldn’t help but wonder how I could do the same thing with SOLIDWORKS. Fortunately, these are just the sort of fun projects I get to spend my time on as an Application Engineer at TriMech!

How To Virtually Carve a Pumpkin in SOLIDWORKS

First thing’s first, we need a pumpkin. Easier said than done when you think of how complex a pumpkin shape could be! Luckily, I’m here to show you how to create one in a few simple steps. There are some advanced modeling techniques in play here, but nothing that can’t be mastered by a skilled SOLIDWORKS user. 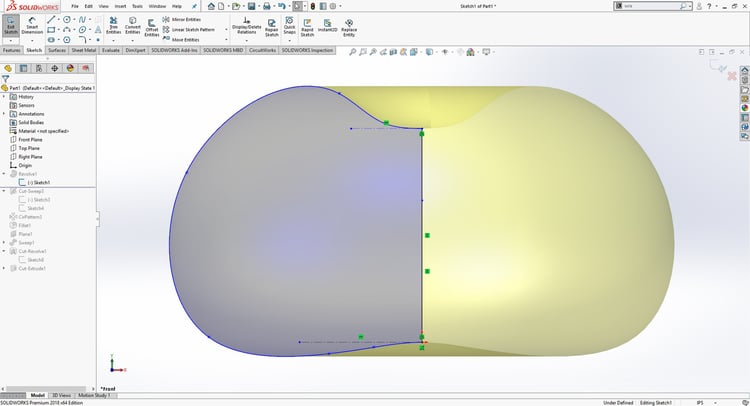 After the sketch was complete, I used the revolve feature to revolve my spline profile about the vertical centerline.

Pumpkins typically have a scalloped shape to them, with ridges in a circular pattern.  To create this, I knew I was going to have to create some swept cuts, so my pumpkin wasn’t so smooth.

A swept cut requires both a profile sketch and a path sketch. For my profile, I created a somewhat smoothed out triangle shape. I was also careful to extend the sketch slightly above the original sketch I used for the revolve. Failing to do so could result in a zero thickness geometry error. 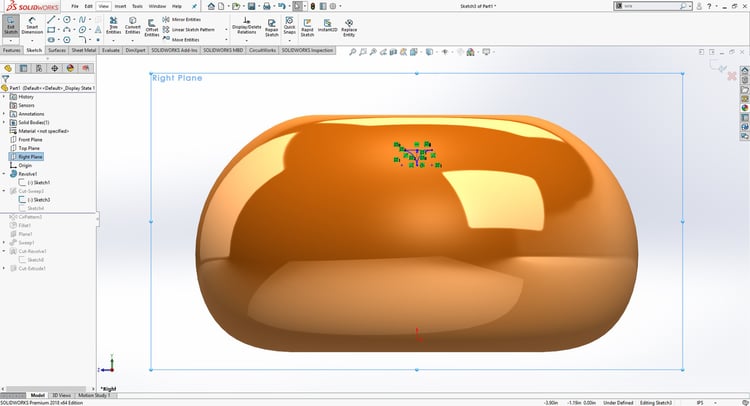 For the path sketch, I created a new sketch and used “Convert Entities” to convert the portion of the original revolve sketch that would serve as the path for the swept cut. 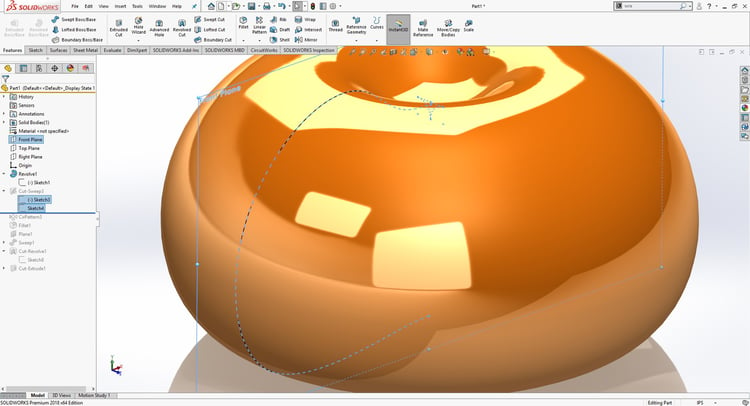 After that, I added the swept cut feature using both of the newly created sketches. 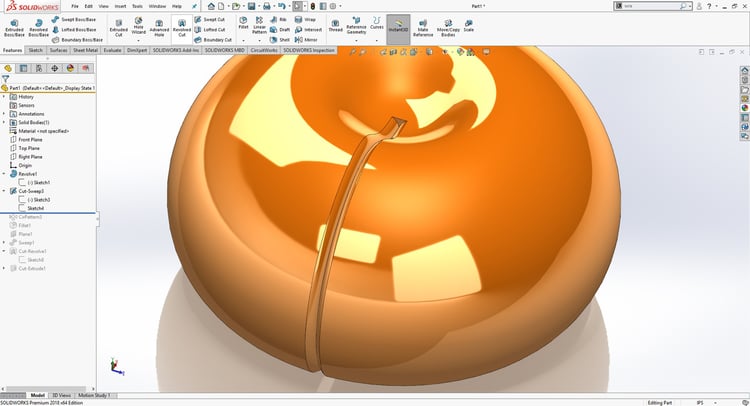 After that, it was time to create a circular pattern of that swept cut about the center axis of the pumpkin. Now our pumpkin is really starting to take shape!

I wanted to smooth it out a little bit further, so fillets were applied to the edges of the swept cuts. The fillet’s selection manager made this really easy, as I was able to select many edges all at once with just a couple of clicks.

Now, it’s time to focus on the “stem” of our pumpkin.  For this, I knew I wanted to create a solid sweep. To do so, I needed a plane that would be suitable for my profile sketch. I simply added another plane that was offset from the top plane. 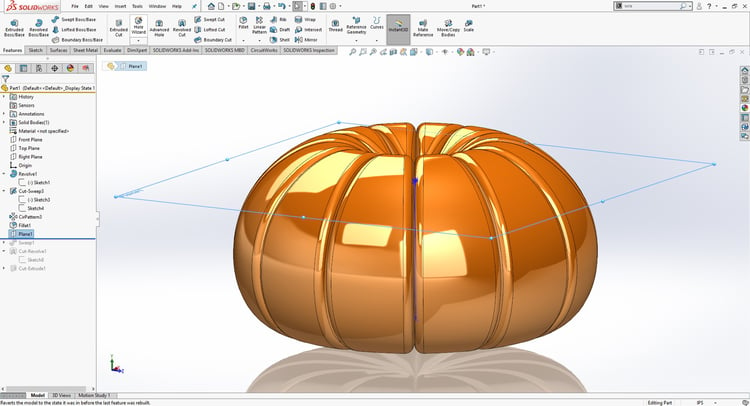 Now that I had a plane in the correct spot, I needed a shape for our stem. I was shooting for something close to a star shape, so the SOLIDWORKS polygon tool came in handy for this. I created a five-sided polygon and added equal length 3-point arcs to create a curved star shape.

Now that I had my profile, it was time to create the path and the guide lines for the sweep.  The path will guide the centerline of the sweep, while the guideline will help the stem taper as it proceeds along the sweep path. To create these, I added two additional sketches on the front plane of my part. 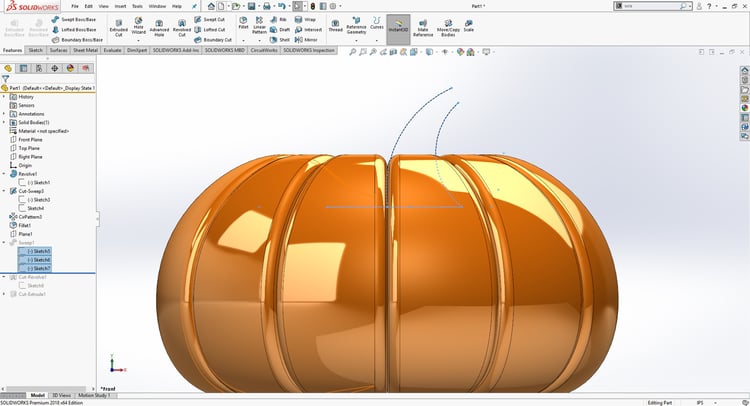 Now it was just a matter of selecting the proper sketches for the profile, the path and the guide line to create the solid sweep.

Next, I wanted to hollow out the pumpkin. I could have used the shell feature for this, but the complex geometry of the swept cuts and fillets can sometimes make it difficult for SOLIDWORKS to complete this feature. Instead, I opted to create a revolved cut on the inside of the pumpkin. To create a revolved cut, we first need a sketch. I added another sketch to the front plane and chose to offset the original revolved sketch that I used at the start of the pumpkin.

Now that we have a hollowed out pumpkin, it’s time to “carve” it! For this, I created another sketch on the front plane, with a vertical centerline rising from the origin. I sketched out half of the shape I wanted for the face of the Jack-O-Lantern, and then mirrored it using the centerline. 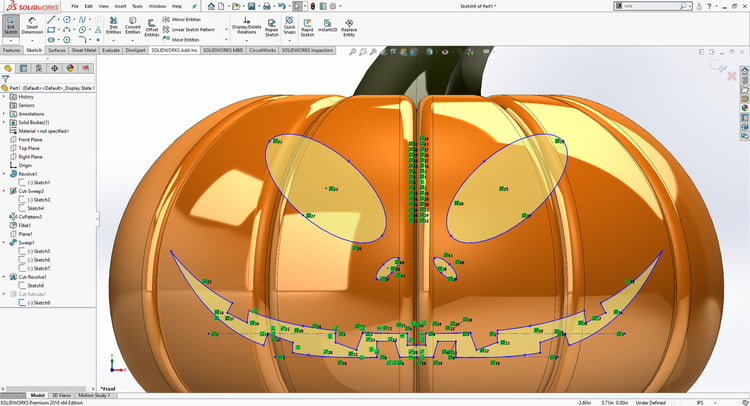 After that, I added an extruded cut and was left with a very spooky SOLIDWORKS Jack-O-Lantern! 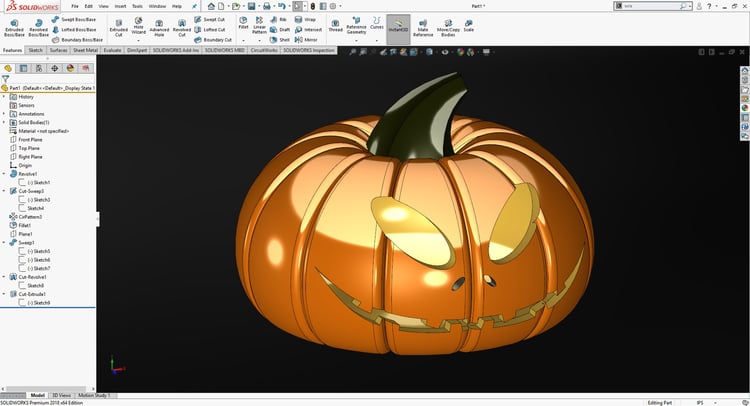 For more SOLIDWORKS tips and tricks, be sure to subscribe to our Video Tech Tips: