How to Use Face Fillets in SOLIDWORKS

Fillets, or rounds, are an essential modeling feature, but even though it's basic, it doesn't mean it can't hold advanced functionality. In this week's Video Tech Tip, we are going to show you how to leverage the advanced functionality of fillets and another little-known feature to help save a lot of time when you're designing in SOLIDWORKS.

The face fillet is added between two faces. This is different than the basic fillet in that you select the faces between which a round gets added. The trick here is knowing that the faces don't have to be adjacent. As long as the specified radius can be generated from one face to the other, the fillet can be added.

The face fillet is the third fillet type choice and is defined by two faces. It has the same options for fillet parameters that a regular edge fillet has, but it is capable of so much more. We use it to add a round between faces where there is an existing geometry that we want to be consumed by the fillet. See the image below where the two selected faces have a lot of existing geometry between them. By using the face fillet option, we can easily add a fillet between the faces and, at the same time, consume the existing geometry. 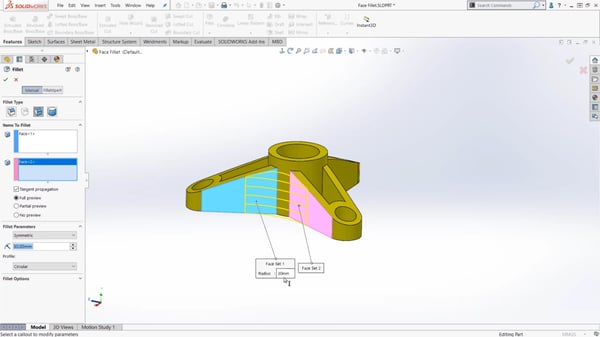 This enables you to add fillets to otherwise complicated geometry instantly without the need for any additional editing. Hopefully, you can take advantage of this great functionality to save time in your modeling.

There are always new things to learn about SOLIDWORKS. Sharpen your skills and learn new tricks with our different training courses.