As electrical designers chip away at an electrical task, it is common for them to work together and share appropriate information while keeping design standards and workflows in place. Knowing the status of a project, previewing schematics and having access to BOM's is not only beneficial to the electrical design team but beneficial to all teams in an organization. Fortunately, there is a way to integrate electrical projects with SOLIDWORKS PDM Professional using the SOLIDWORKS Electrical PDM connector tool.

How to Integrate PDM Professional with SOLIDWORKS Electrical 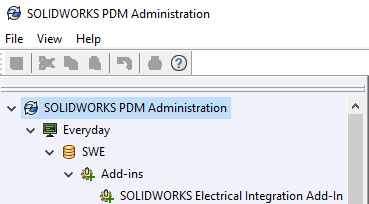 The users of SOLIDWORKS Electrical will also see a new tab added to their ribbon menu named SOLIDWORKS PDM that will give them functions to operate with PDM.

SOLIDWORKS PDM is built into Windows Explorer, so users work in a familiar environment but with much more information and control. SOLIDWORKS Electrical makes it simple to begin a new project, regardless of whether you need to start from scratch or duplicate a current project. You can rapidly make another project directly from the PDM vault, similar to other PDM documents. Quickly, the SOLIDWORKS Electrical project is put away and overseen inside the PDM Vault. As the project is created, it's anything but difficult to begin, including basic task properties to characterize project details.

When an electrical project is first checked into the PDM vault, a project folder will be created automatically. Within this folder, you will have a folder containing the projects individual schematics in .dwg format, a folder with the BOM, the project in pdf format and the actual .tewzip project file.

You will be presented with the SOLIDWORKS Electrical Integration Administration window with three tabs named General settings, BOM settings and File structure. General settings define the configuration for the most important system values and BOM settings define the settings for handling Bills Of Materials. File structure defines the configuration for file and folder names in SOLIDWORKS PDM and the mapping rules for the attributes synchronization.

The SOLIDWORKS Electrical PDM connector gives the user greater control and enables better collaboration between mechanical and electrical teams. Integrating SOLIDWORKS Electrical with PDM offers companies the ability to keep all designs in a centralized area, which will help with project organization and development.

If you want to learn more about this integration, watch our on-demand webinar, where one of our Application Engineers discusses the benefits and processes of integrating the two software together.