Using an Options file can help control how the licenses issued by the SolidNetwork License Manager are used within the company.

It has the ability to control the following:

Details for this are described in the FLEXLM End Users guide in Chapter 13, Managing the Options File.

Here is an anatomy of the sample file:

TIMEOUTALL will add a time out to all features. You can use TIMEOUT feature name instead to control a specific product, but most people just time out all features.

If a user leaves their machine unattended for 15 minutes, their license will return to the license pool. If they return and a license is still available, they can continue working as if nothing happened. If there are no licenses available, they will be able to save their work.

If you have users borrowing licenses, the longest time they can borrow the license for is 30 days by default. MAX_BORROW_HOURS will let you change that to a shorter time. You cannot make it longer than 30 days.

As the name implies, the number is in hours. In this case, the 336 would limit the time users could have a borrowed license out for is 14 days.

This command helps retain licenses in the office, so all licenses cannot be borrowed at once. In this example, a user will not be able to borrow a license if there are not more than three left in the pool.

If set to ON, user names and host names specified with the options file GROUP and HOST_GROUP keywords, respectively, are treated as case-insensitive.

By default, GROUPCASEINSENSITIVE is OFF, and user and host names are treated as case-sensitive.

The GROUP function helps simplify the file for larger companies. You can assign users to the group and then control the group itself when defining the controls for those users.

In this example, we are defining a group named TECH, containing users todd, chris, and jeff. The group name can be anything that makes sense, but the usernames need to match their Windows login names exactly. The user names are case sensitive if GROUPCASEINSENSITIVE is not set to On.

The HOST_GROUP function is a way to define machines instead of users to control.  It works just like the GROUP function above, and this example is creating a group named MACHINES which includes machine names mach1, mach2 and mach3.

This will RESERVE a specified number of licenses of the defined feature name for a GROUP defined above as the TECH group. In this case, it is reserving 3 SOLIDWORKS Professional (swofficepro) licenses for the group.

Many times this function is used when the licenses were purchased by different departments, but they are sharing the same license manager. Each department could have their own group with the licenses they purchased reserved for them.

This works just like the example above but is reserving a single SOLIDWORKS Premium license for a user with the login name of john. When controlling individual users, they do not have to be defined in a Group but can be for other functions.

Both of the above would keep a USER with login john from using SOLIDWORKS Simulation Pro or SOLIDWORKS Flow Simulation. He would be denied a license if he tries to turn on the add-ins.

Allows the users defined in the TECH group to borrow core SOLIDWORKS licenses.

Keeps all machines listed in the HOST_GROUP MACHINES list from borrowing a SOLIDWORKS Premium license.

You can create the option file using Notepad as it is a simple text file. Name the file "sw_d.opt" (without quotes).

The recommended location for the options file is in the {SOLIDWORKS SolidNetWork License Manager Installation directory}\Licenses\sw_d.opt. However, with 2010 and later it can be placed where you wish and point to the location below.

Once the file is created, you need to get the license manager to read it by doing the following:

1. Click the Modify button on the Server Administration tab 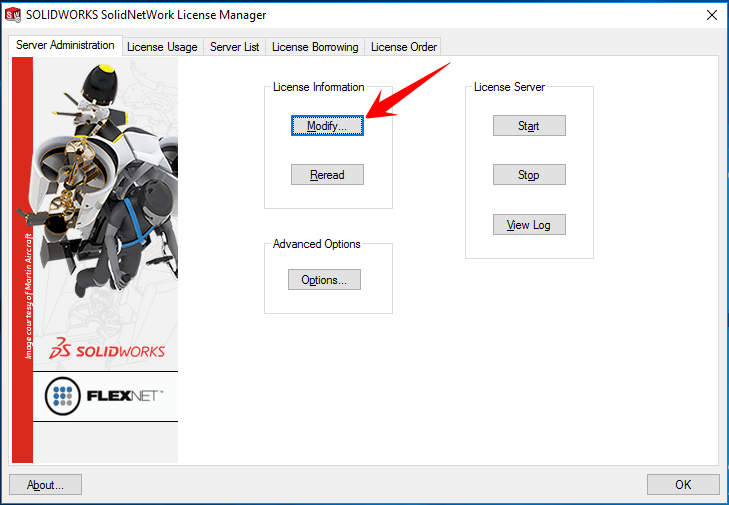 2. Select the "Activate/Reactivate a software license" radio button, and then click Next.

3. Check the Options File box, and Browse to the desired .opt file. 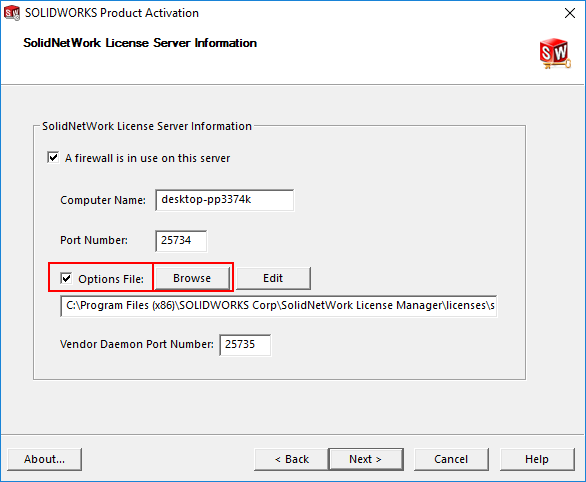 Once the activation process is complete, the users will be under the control of the options file.

Learn more by reading our blog post about Network Licensing.