Many people’s dream is to travel the world and experience new adventures. But this might not always be the case because of natural disasters, over-tourism or even human-motivated vandalism. To document these at-risk landmarks and relics, 3D technologies, such as laser scanning, drones and photogrammetry are used to capture the detailed images of these places and objects. While heritage preservation has played an important role in encouraging more cultural exploration, there is a whole new use of 3D technology which could cause awareness and appreciation nationwide over the next decade from the comfort of our own homes.

What is Heritage Preservation

Heritage preservation is the conservation and protection of historic structures, sculptures and culture of a nation. Heritage has been passed from generation to generation, which is important to preserve in this fast-changing world. The goal of conserving is to benefit future generations through learning about the past. With various threats in the world, activists and preservationists can spread awareness to protect these historical artifacts. Heritage preservation provides opportunities to restore rather than replace the remains of the past and bring them into the future.

The Taller Buddha of Bamiyan before and after destruction.  Source: https://www.cyark.org

How 3D Technology is Being Used

Until recently, replicas of historic data (such as artifacts, statues, art and architecture) were traditionally made with the use of molds and casts. However, this can potentially damage delicate objects and degrading materials. Using 3D technology, object data can be captured via lasers, including precise size and texture data, without touching the original at all. Even color data can be captured, so artwork like paintings, mosaics and frescoes can be replicated safely.

In this example, we digitally recorded and were able to preserve history through the Artec Space Spider scanner. This bronze statuette of the Dragon and Phoenix was completed in two scan intervals with the use of the Autopilot feature in Artec Studio. Each scan picked up the design, shape and texture of the statue. While this is an intricate object, Artec Space Spider’s high resolution captured the complex geometry with high precision. The resulting high-quality 3D model can be studied by anyone in a virtual space, allowing them to zoom in an appreciate the details of this piece of ancient Chinese culture. Perhaps even more so then if they were looking at it through a display case in a museum.

We can also use the 3D data from our scan to create a practical replica, not just a virtual one. By using 3D printing technology, we can generate replicas on-demand using a variety of materials of imitate visual and tactile properties.

There are many different 3D priting technologies that can be used to do this, but in this case, we chose the Stratasys J750 which uses PolyJet technology to provide the needed levels of detail and realism in the finished product. It is the only technology with the ability to both simulate a variety of materials and engineering plastics and combine colors and materials into one finished product. PolyJet 3D Printing works by jetting layers of liquid photopolymer onto a build tray and instantly curing them with UV light. The fine layers build up to create a precise 3D model or prototype. Models are ready to handle right out of the 3D printer, with no post-curing needed. 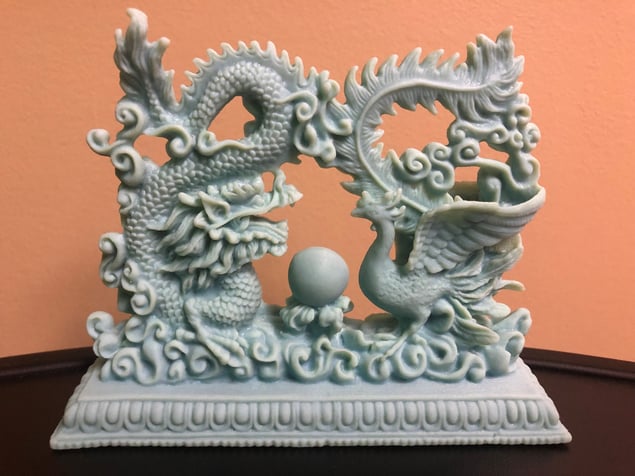 Other Ways 3D Technology is Being Used

Because the future is unpredictable, catastrophic events, erosion, climate change or human actions threaten valuable landmarks, sites and objects. Although disasters can’t be prevented, technology can always secure that there are blueprints and backup replicas for generations to examine. Google Arts and Culture is expanding its Open Heritage Project by helping preserve the world’s most historic sites using 3D technology. CyArk, a non-profit organization, and Stratasys teamed up with Google to create a virtual reality portal that everyone has access to. Their mission is to make 3D cultural heritage data open and accessible to teachers, scholars or anyone interested. This project enables everyone to be able to explore and have access to landmarks, monuments and other items right at their fingertips.

Two temples at the site of Bagan in Myanmar. Source: https://www.cyark.org

CyArk, Stratasys and Google have set out on several expeditions to document the Mayan ruins, temples in Myanmar and even to the cathedral of Notre Dame. They have partnered with 1,500 museums from over 70 countries to help preserve the art. Many relics are housed in these facilities which then were lasered to virtually be viewed by a wider audience either on a mobile device or virtual reality headset. The growing demand for 3D technology combines high levels of accuracy and realism to keep the culture of the world preserved.

As the 3D printing industry has developed over the years, so has the need for heritage preservation. Heritage preservation can capture moments in history that can never be seen again. Through the Space Spider, engineers can scan, print and make models of historic monuments and objects to educate in the classroom. Although 3D technology assists in the restoration efforts, it also wants to encourage people to protect the environment and find ways to use these scans in their own interesting way. Now, instead of having to travel to these places, you have access to history in a more tangible way.

Want to learn more about scanners and their uses? Check out the Artec Space Spider by clicking below.