3D scanners are finding their way into more and more disciplines, proving benefits to humankind with every step. But it isn’t just people that are seeing rewards. Researchers are now finding ways to help our friends in nature. Artec 3D scanners are perfect for the task due to the high-resolution scanning and portability while dealing with animals. Let’s look at a couple of examples.

Lloyd Hopkins, an ambitious Ph.D. student at the University of Swansea, is heading up an exciting marine biology project focusing on creating customized tags for a variety of marine wildlife. Swansea University’s Lab for Animal Movement (SLAM) researches marine animal life using state-of-the-art tagging technology and leading data visualization techniques. This is done to understand more about the lives of these amazing animals and ultimately how to preserve their ecosystem. The tagging data returns vital information such as speed, the animals' activity levels and migration patterns.

Lloyd’s research is focused on developing innovative methods for attaching these tags to various marine animals in a non-invasive, easy-to-use way. If the tags are too loose they will be ineffective and might even fall off. Too tight and the tag will cause distress to the animal. “Ethical development of tagging practices and techniques is an important benchmark, but new technologies that allow us to fully quantify and simulate a tag’s effect on an animal are often under-utilized or unexplored,” says Lloyd. His goal was to find a way to develop an ergonomic, form-fitting attachment method for marine animals like sharks, dolphins and turtles. To do this he first needed a way to create accurate measurements of each animal's desired tag location.

Lloyd was after a solution that would quickly, and safely, 3D scan the sea creatures. He also needed software that would give him and his team the freedom and tools to create customized tags. They chose Artec’s most popular 3D scanner, Artec Eva, and combined it with Artec Studio 12 scanning and post-processing software. Lloyd and his team used the lightweight Artec Eva 3D scanner to quickly and accurately capture 3D data from both deceased and living marine animals such as sharks, turtles and dolphins, as well as some fish and crab species.

After being trained and using the Eva, Lloyd was convinced 3D scanning is the optimal way for capturing large animals and getting reliable data that can be examined and utilized. Stating that without the use of this technology, much of the design phase would have to rely on estimated data that may not translate properly to a real-world application.

The Eva made it possible to get the measurement data they needed by allowing Lloyd and his team to capture animals both indoors and outdoors. And since the Eva has a portable battery pack, scanning could take place anywhere, even right next to the water. It took researchers only a few days to capture the needed information from various species.

The workflow of the project was as follows: first, Lloyd and his team obtained a high-quality scan of an animal. In some cases, Lloyd and his team scanned deceased specimens such as sharks and turtles. In other cases, the animals were very much alive! When capturing the live dolphin, for example, trainers were able to encourage this highly intelligent animal to the side of the pool, where Lloyd made quick and detailed scans of its beautiful fins.

After 3D scanning the animals, CAD software was used to build the tags around the scan data. With a designed tag shaped to fit the animal, it was ready for printing and real-world testing. The hard work paid off. The finished product was instantly better in terms of size compared to those created using measurements taken by hand. 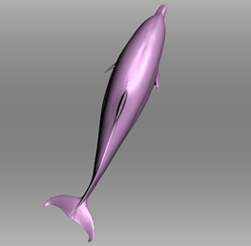 Lloyd stated that the information gathered via 3D scanning is much more reliable and precise, compared to records obtained the traditional way, by hand; as this type of data capture is time-consuming, leaves room for error and can make it harder to understand how these measurements fit together in space relative to the animal. Though you can use casts to get the complete shape, it can only be done on smaller creatures or just part of an animal. Casting also takes a lot of time, as you need to wait for the cast to set, and this is not the best option for living animals, which can’t hold still for a long time!

Thanks to Artec Scanners, Lloyd and his team were able to capture all the precision data they needed in very little time, and although the research is ongoing, the dolphin 3D scan data has attracted attention from dolphin trainers and veterinarians in Spain. Impressed with the possibilities of the 3D scanning technology, animal experts say it would save them significant time in veterinary duties such as monitoring growth and performing animal autopsies.

Our next example is from Arizona, where the Phoenix Herpetological Society turned to Artec to give an alligator a second chance at life. Meet “Mr. Stubbs." He was named Mr. Stubbs after an unfortunate encounter with a much larger alligator left him without a tail. 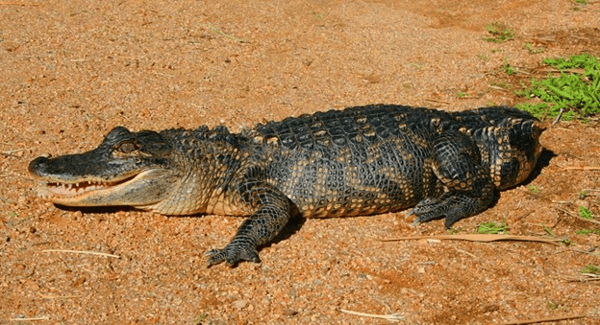 Not having a tail is no laughing matter for an alligator. It meant that besides not being able to swim in deep water (he could easily drown), he also had real trouble at mealtime. The other alligators around him were faster at catching prey because gators use their tails for lunging and attacking. What this meant for Mr. Stubbs is that unless some hapless creature plopped down in front of his hungry jaws, he could likely starve to death. Russ Johnson, president of the Phoenix Herpetological Society, wanted to do more for Mr. Stubbs. Russ called upon Dr. Marc Jokofsky and his assistant Sarah Jarvis of the Center for Orthopedic Research for help. A team of specialists was assembled, and they considered their options for creating a prosthetic tail.

Dr. Justin Georgi, assistant professor of Anatomy at Arizona’s Midwestern University, also joined the team. Dr. Georgi had been studying the movement of alligators and other reptiles for years, and offered his help with analyzing Mr. Stubbs, to see how best to fit him with a new tail. 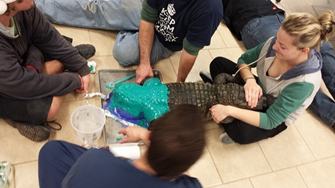 By using some alligator specimens of various sizes from Dr. Georgi’s lab as references, the team calculated the right size, weight and density of tail for Mr. Stubbs, one that would be balanced in proportion to the rest of his body, and evenly distributed. Once they had these measurements, Dr. Georgi selected one of the specimens from his lab to be the model for the new tail. When it came to the actual prosthesis design, Georgi consulted with Dr. Jocofsky and the team from The CORE Institute.

“Without his tail, Mr. Stubbs can barely swim and only walk very poorly,” Georgi said. “His terrestrial posture and gait are so poor there was a real concern about his long-term joint and bone health.”

Dr. Georgi had previously tried to make scans of an alligator's tail using a laser 3D scanner, but the scan quality was too poor for capturing enough detail, so he teamed up with others on making a new tail for Mr. Stubbs.

Once onsite, they used an Artec Eva to make a high-resolution, 3D model of the “cast tail” of a recently deceased, similarly-sized alligator (Georgi and his team had used the same tail as a model for making earlier prostheses). Stax3D processed the resulting data in Artec Studio, modifying the 3D model, fixing a few flaws and adjusting the size and fit, so it would match perfectly with what little was remaining of Mr. Stubbs' tail. They exported the file as an STL and from this, the 3D printed tail was made.

“We were amazed at the speed and quality of the Artec scanner compared to our initial attempt,” Dr. Georgi said.

Dr. Georgi and the team were beyond pleased with the level of control they had to view and modify the digital model. “The fine control over details of the size and shape of the tail that we achieve with the digital process gives us the chance to actually experiment with different properties so that we can understand on a more direct level how the prosthesis affects Mr. Stubbs,” he said.

After 3D printing the custom model, the researchers created a silicone cast of it, and from that, several prosthetic tails were custom made for Mr. Stubbs. Now, every time they strap one on him, he acts so naturally, as if it's always been there. He doesn't show signs of stress or discomfort while wearing it, proof that it must feel natural to him. He's out there swimming and diving and lunging after his meals just like the rest of his cold-blooded neighbors.

As Mr. Stubbs grows larger he will need to be fitted with as many as 40 prosthetic tails, and now the team has a 3D model, making the required modifications can be done with ease. 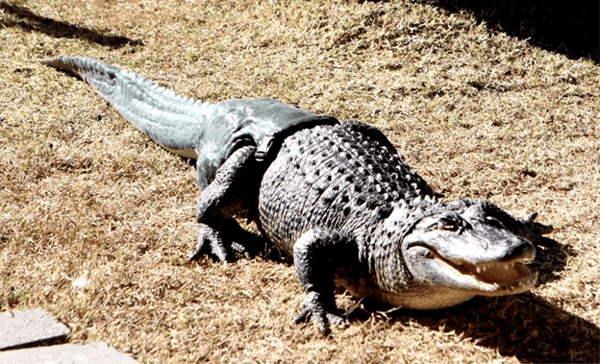 This is certainly a leap in progress along the avenue of alligator prosthetics, but 3D scanning and printing are making even greater headway in the field of human prosthetics. Companies and individuals are leveraging this technology to break down the limitations of previous manufacturing methods for prostheses. It is amazing the avenues 3D scanning and printing are carving, we can’t wait to see where they lead next.

Interested in learning more about which 3D scanning technology will work best for you? Watch our on-demand webinar Which 3D Scanning Technology is Right For You?