NASA has renewed determination to send humans further into space than we could have dreamed. They have developed advanced programs like the Orion capsule and the Space Launch System, but whatever the program the one key step in preparing astronauts for the journey is successful training.

NASA needed a way to scale down the cost and timing of traditional training while still maintaining its strict quality standards, especially when it involves the exploration of Mars. Mars is a long way away and missions are expected to last months, possibly years. NASA engineers recognized the advantages of immersive environment technology and began using it to create realistic training experiences while running a diverse range of simulations.

Artec 3D has been developing handheld and portable 3D scanners since 2007 and is now a recognized global leader in the industry.  In 2013, they had released a new portable and user-friend scanner the called the Artec Spider. The folks at NASA took notice and thought it would be a good fit to take into space for testing and evaluation.

After a few modifications and improvements to accommodate the new out-of-this-world application, the new Space Spider was designed and became the predominant version of the scanner a short time later. Thanks to its enhanced cooling capabilities the Artec Space Spider was able to perform where others had issues with overheating. This handheld scanner has been engineered to perform in nearly zero-gravity environments and can capture objects with an accuracy of up to 50 microns and a resolution of up to 100 microns. 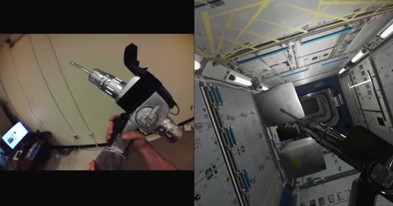 Designing a means to simulate reduced gravity and microgravity environments is top priority and the Active Response Gravity Offload System (ARGOS) at NASA’s Johnson Space Center was developed specifically for that purpose.

“It is essentially a smart tether which attaches to your back, offloads your body weight and accounts for your momentum in the vertical and horizontal directions to make you feel like you are in Lunar gravity, Martian gravity, microgravity or anywhere in between,” says Matthew Noyes, Software Lead at NASA’s Hybrid Reality and Advanced Operation Concepts Lab.

The Hybrid Reality Lab environment has been merged with the ARGOS system, so the user is able to move around a virtual representation of the International Space Station by pulling themselves through the 3D world. By doing this the virtual ISS appears to move around them while they wear the virtual headset. An added benefit to this system is that multiple users can train together in the same virtual reality environment, working together even if they’re on opposite sides of the world. It also allows people at home with their own headsets to log into a server and watch astronauts train in real time.

Space Tools
There is a wide variety of tools used on space missions such as the Pistol Grip Tool (PGT) for drilling bolts (see below). To get a better understanding of using it in space, the PGT was scanned using the Artec Space Spider to create highly realistic textured models and import them to a virtual environment for simulation training. 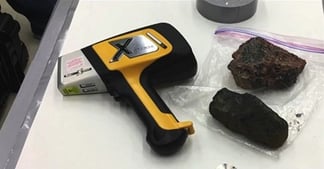 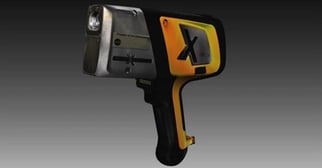 Pistol Grip Tool for drilling bolts in real-life, compared to it's virtual counterpart.

“Rather than painstakingly modeling these tools/assets from physical measurements and photographs, or working from texture less CAD files, we thought that using a 3D scanner to create millimeter-precise models from real objects was a much better solution,” says Matthew Noyes.

“The Hybrid Reality Lab uses the Artec Space Spider scanner due to its use of LEDs for illumination, which makes it eye-safe,” says Frank Delgado, Project Lead at NASA’s Hybrid Reality and Advanced Operational Concepts Lab. “The Artec also met our accuracy requirements, is easy to use, and provided a very good solution for scanning small and medium-sized objects.”

NPP Zvezda is a firm based out of Russia that makes life support systems for pilots and astronauts. Artec3D was tasked to digitally capture the Sokol-KV-2 spacesuit in precise, color 3D as it it’s being worn by an employee, in under 10 minutes. Artec 3D employees visited NPP Zvezda and used their scanner to successfully obtain this 3D copy of the suit for integration with a 3D spacecraft model.

This specific suit is worn by astronauts when they are faced with the highest risk of depressurization. They are very light (weighing about 8.5 kg) and have been used since 1979. Currently, there has not been a situation in which they have failed. 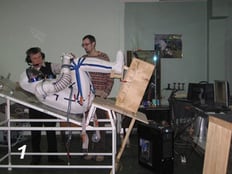 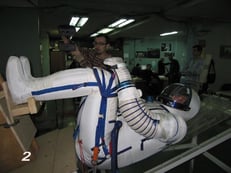 "What we were not able to see on paper and in the blueprints, we are able to see with three-dimensional technology. Working with 3D models is of great help when designing a new spacesuit. It can be aligned to another chair, rotated, angles may be changed – this is all possible with the help of the resulting 3D model," said one engineer.

Using the Artec scanner gave NPP Zvezda the inspiration to continue with Artec 3D and help develop seating surfaces for the astronauts. It is also considering using the scanner to digitize a soft-shell suit that increases range of mobility.