3D scanning and 3D printing are impacting the world of historical preservation. Whether it is scanning a city center or documenting the details of an extinct civilization, 3D scanning is making the ancient world accessible in ways we never before imagined. This is relevant now more than ever to researchers, as the artifacts they typically must examine are quite old, and in many cases extremely fragile. Thanks to 3D scanning these objects and many more can be accurately documented with no risk to the original artifact.

Digital Historical Architectural Research and Material Analysis (D.H.A.R.M.A) is a research team based at the University of Notre Dame School of Architecture. This team is tasked with documenting various historic buildings and monuments around the world, and in turn uses the models created from this data to aid in the preservation and reconstruction of historical architecture. Further plans for the scanning process include scanning historic buildings listed in the U.S. National Register of Historic Places. The team has additionally used 3D scanning and 3D printing at sites around the world, scanning the Taj Mahal in India and the Roman Forum. The data gathered in these scans has been invaluable for aiding in the preservation and reconstruction of these sites. 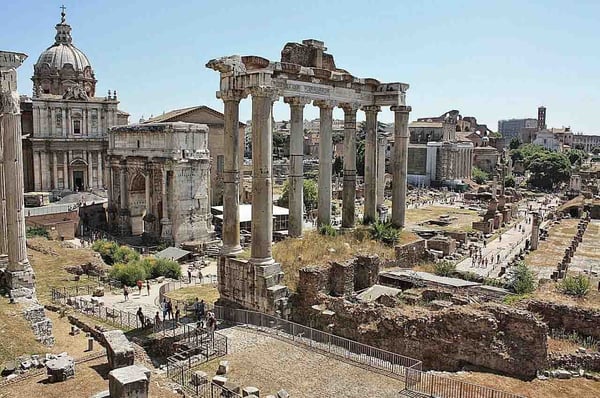 Back in the 19th century, a British expedition led by Alfred Maudslay documented much of the ancient architecture by creating giant true-to-scale plaster casts. As a reference to the amount of work involved it was stated that “A regular monument required anywhere from 600-1000 individual segments of plaster that later had to be pieced together to create the final molds that were shipped back to England.” These were essentially ‘negatives’ of the monuments, capturing all their characteristics in plaster or papier-mâché. Then, back in England, the ‘positive’ casts we have today were created from these same molds. These casts are highly-accurate replicas of the original monuments themselves, which makes them perfect for historical purposes. This is a huge investment in time and after years in a museum the original casts and molds are fragile and irreplaceable.

Fast forward to the 21st century where the Google Maya Project comes into play. The very foundation of the project demanded the creation of incredibly lifelike, historically accurate 3D models of these casts. The British Museum’s curator, Claudia Zehrt, initially wanted to use photogrammetry for documentation as it has a track record for being used in this capacity. However, due to the large nature of the casts and their positions within the storage racks, it soon became clear there would not be enough room to shoot all the various angles needed for photogrammetry. Due to its versatility in scanning medium and large-scale objects in full-color, the project’s team opted to use the Artec Eva handheld 3D scanner. Zehrt was quickly up to speed with the scanner's use and was impressed with the ability to capture details in the most cramped of conditions.

She goes on to explain her scanning process, “On average it took about 10 minutes to scan each cast. Small casts were faster, while some of the big ones required 20 minutes or more. It also depended on how deep and narrow their carvings are, since this makes it harder for the scanner to pick up those difficult-to-access surfaces. And if there had been more space between the casts, it would’ve been easier and faster. The 11-15 inches that I had certainly slowed things down. If the casts would’ve been free-standing, with no obstructions, I could’ve easily scanned them in half the time.”

In addition to the various monuments that were documented with the Eva, it was also used to capture the details of a hieroglyphic staircase. This portion of the project focused on creating an exact CNC-milled replica to be used for display alongside the original. The original casts for the stairway presented Zehrt with some challenges regarding scanning. She explains, “The stairway consists of 12 casts, all of which were 3D scanned with Eva, which went smoothly and quickly. But because one of the casts was broken and some of the detail was missing, we needed to refer back to Maudslay’s original drawings and photographs of that step to recreate it digitally in its entirety. And we succeeded.” 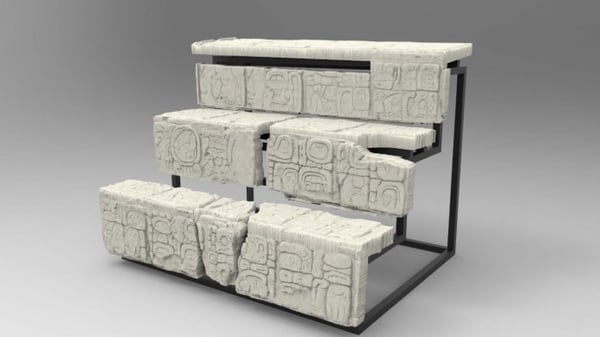 A 3D model was generated from the scans and was sent to be milled from Ancaster Limestone, a Middle Jurassic oolitic limestone quite like the limestone the Maya used for the original stairway. Following the milling process the replica was sent to be displayed alongside the original in Palenque.

“We are just at the beginning of seeing what we can do with 3D scanners and the remarkable models they can create of priceless cultural heritage around the world. Beyond the research benefits of 3D scanning, as well as the incredible possibilities we’re seeing with turning these objects into VR exhibits, there’s something equally if not more important. That’s using this technology to return these treasures back to the people, to the cultures that created them. Today, using a handheld 3D scanner like Artec Eva, I can digitally capture in minutes almost anything on display in a museum or even onsite at an archaeological excavation.”

This isn’t the first time Google and Artec have been involved in preserving ancient works. Through the Google Art Project, teams were tasked with capturing and digitizing tens of thousands of pieces of artwork from around the world. The goal was to create full-color, high-resolution 3D models of a range of pieces and make them available to museums around the globe. Google chose to use the Artec Eva in the creation of its online galleries, which includes over 90,000 digitized works from over 500 museums worldwide. The Artec Eva was integrated into a custom-made setup to create textured, high-resolution 3D models of over 200 artifacts, such as vessels, statuettes and pottery.

Through each of these museums in the Google Art Project library, users can see everything from animal skulls to ancient human masks and statues. Funerary objects, models, carvings and priceless artifacts of many types are also included. You can select the artwork you want to explore and with your mouse, turn around to get a 360 view of the 3D image.

Thanks to 3D scanning it is now possible to share these great works with inquisitive minds around the world in incredible details like never before, and when major players like Google and Artec enter the mix the results are astonishing and will be for years to come.

Want to learn more about the use of 3D scanning in other industries? Put on your Sherlock Holmes hat and explore our client's case study which explains how they use 3D scanning to preserve forensic evidence.