3D scanning is becoming more and more vital in the world today. The ability to create an exact one-to-one replica of the object being scanned has uses well beyond the commonly thought of engineering departments. Healthcare has been utilizing scanners to great effect! In this article, we show examples of how healthcare professionals are utilizing this technology including creating custom 3D printed helmets for children with brain-related neurological conditions and even reconstructing body parts for patients with physical deformities.

Our first example takes us to the UK where Dr. Ross Head, at the Cerebra Innovation Centre, was tasked with creating a custom riding helmet for a child born with cerebral palsy and hydrocephaly. Because she was born with a form of cerebral palsy called spastic diplegia, 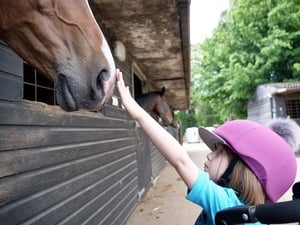 a young girl named Imogen can't run and play like other children because she has to spend most of her time in a wheelchair or sitting down. However, this does not stop her from riding horses, which has been a great joy to Imogen. However, because she was also born with hydrocephaly, which causes excessive swelling of the brain, she could never find a riding helmet that fit correctly.

Helmets were either too big, slipping down and covering her eyes during riding, or were too small causing discomfort. To stabilize a larger helmet, her mother would wedge a piece of material in it. After a short period of time, this would cause Imogen to have a headache. As Imogen's love and dedication for the sport grew, she began taking part and excelling in dressage riding, making it more important than ever for her to have a helmet that fit properly.

Frustrated with the lack of options, Imogen's mother, Catherine, reached out to Cerebra, a charity known throughout the UK for creating custom products for children with additional needs. The design engineers at Cerebra Innovation Centre had already made several custom helmets for children with hydrocephaly. Dr. Ross Head explained how it all began. “The very first process was using the Artec Eva 3D Scanner, once I saw what it could do, my mind began percolating with ideas on how we could make use of it in our work, and that’s when it hit me! The idea of using it to make bespoke helmets.” 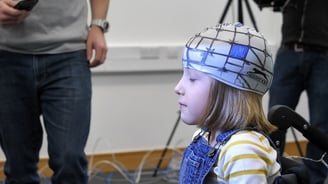 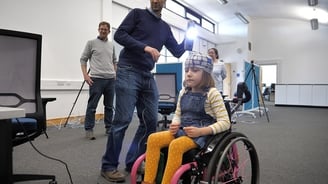 He went on, “The final design/production process clicked into place when I thought up the synergy of scanning, 3D printing the molds, fiberglassing the shell and CNC machining the polystyrene liner.” 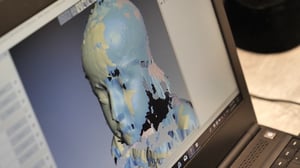 The Artec Eva is lightweight and scans quickly using 100% safe structured white light. The 3D scan then appears in real-time in Artec Studio, the scanner’s software. Scans are then processed and exported to CAD software prior to 3D printing.

Once the scan is exported to the CAD software, a two-part model is created. Dr. Head explains the process of the helmet’s creation, “The inner polystyrene protective layer is exported for CNC machining and the shell model is used to create a 3D printed (female) mold. Once the inner surface of the mold is made smooth, layers of fiberglass and Kevlar are laid up using epoxy resin to make an extremely strong outer shell.” 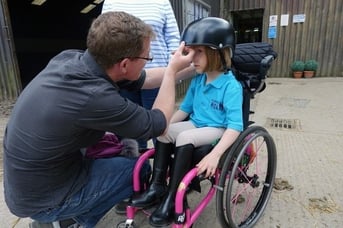 The helmet is then approved and certified by the BSI (British Standards Institution), attesting to its high level of protection and quality. Dr. Head and his team have scanned two children so far (including Imogen) to make three helmets. Cerebra Innovation Centre is in the process of making more helmets and has created a number of other products to help children with disabilities.

Another way 3D scanning is being used comes from Edinburgh, Scotland where Dr. Ken Stewart, of the Royal Hospital for Sick Children, uses an Artec Space Spider 3D Scanner to capture the geometry of ears with precision and designs implants for patients with ear malformations. 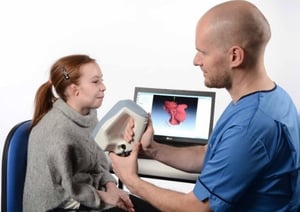 Caring for over 100,000 children annually, the Royal Hospital for Sick Children attends to children like Ellie, who suffers from a congenital malformation of the ear’s elastic cartilage. Called microtia, this refers to an abnormal smallness of the ear. For some, this condition leads to the pinna (or external ear) being so small that it can appear almost non-existent. Because the middle ear and external canal are underdeveloped, microtia often brings some level of hearing impairment.

Dr. Stewart, has been working to advance the ways in which to perform reconstructive surgery on both children and adults with ear malformations. He was well versed in the traditional reconstruction methods, he knew there had to be a better way. Utilizing today's advanced technology, Ken looked to the Space Spider for a solution. After seeing a series of samples, Dr. Stewart was convinced the Space Spider could capture the complexities of the human ear with precision. 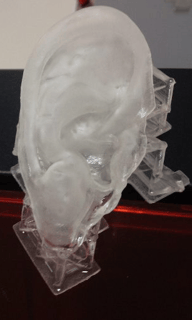 The Royal Hospital for Sick Children purchased an Artec Space Spider with Artec Studio along with the Roland ARM-10. It took one afternoon to be installed and hands-on training began the next day. Dr. Stewart remarks, “Starting with exterior 3D scanning was new for us and as we have busy schedules with day-to-day patients, it has taken a little time to perfect. However, with the training and additional notes Patrick provided, we can now use the solution from scanning to 3D print with relative ease. The model is then sterilized and utilized in theater to improve the accuracy of our surgical reconstruction.”

After integrating the Artec Space Spider, the ear reconstruction process has been simplified and systemized. After an initial consultation, the patient visits the hospital to have their unaffected ear scanned. Because Ellie was diagnosed with bilateral microtia (meaning both ears are affected), they scanned her sister's ear. Images of the affected ear may also be taken for reference. 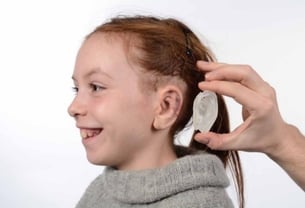 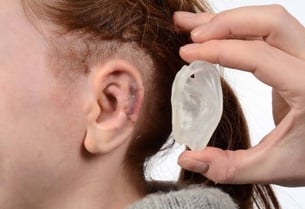 Utilizing the Artec Studio software, the images are then aligned and fused to construct a 3D digital model of the ear. It takes around three hours for the reproduced ears to be 3D printed, after which they are washed in isopropanol. They are then left for a few minutes to sit under a UV lamp to harden into their shape. After they are sterilized and sealed, they are finally ready to be sent to the operating room to serve as a 3D template for ear reconstruction.

Healthcare is one of the most vital resources we have available to us today and, thanks to 3D scanning, it is now easier than ever to improve the lives of so many. These are just an example of the many ways 3D scanning is making its mark, and we are excited to see what the future holds.

Interested in learning more about how 3D technology is advancing the healthcare industry? Watch our on-demand webinar as three of our application engineers give their take on the future of 3D printing in healthcare.