The eDrawings software serves as a communication tool designed to share 3D drawings and 3D models across various teams. The software creates a highly compressed version of these files that are easy to share. Most people know of eDrawings as a standalone tool for viewing SOLIDWORKS files for individuals who do not have SOLIDWORKS. That was true and still is, but incremental improvements have been introduced in the last several iterations that will enhance your experience with the software. There are different versions of the software, including eDrawings Viewer which you can download for free, and eDrawings Professional which is integrates with SOLIDWORKS software products. In this article, we go over some of the most relevant features in the software.

eDrawings was created to help individuals and organizations communicate their design data clearly, easily and effectively. 2D and 3D file data is compressed to be able to share it with multiple individuals via email. Different users can access these files and adjust as needed without having to worry about software compatibility. 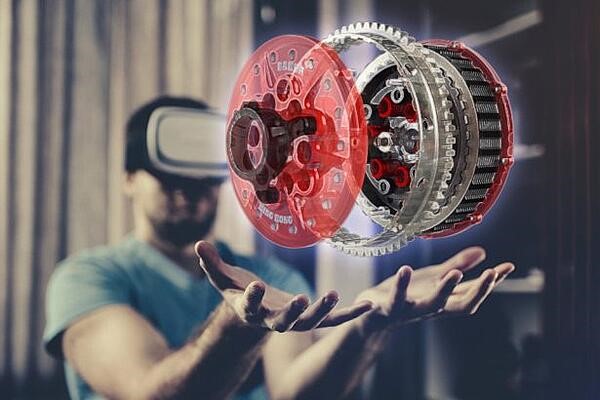 Another great feature included with eDrawings is its AR/VR capabilities. Through your desktop or mobile device, you can view your designs in the context of the real world.

>> Learn more about viewing your SOLIDWORKS files in a virtual space

You can create eDrawing files from inside of SOLIDWORKS easily with the plug-ins for the following CAD platforms for direct publishing:

eDrawings can view a part showing the dimensions and the tolerances. When the tolerance is selected, the associated feature highlights, reducing potential mistakes. The ability to measure key dimensions may be enabled by the author of the files, enhancing file security. If changes need to be added or approved, markup can be added to the file, allowing greater communication and reducing duplication of files.

When displaying an assembly, the bill of materials (BOM) can be included in both the drawing and the assembly, making communication easier with suppliers and clients. The BOM table gives a listing of all the components and subassemblies used in the assembly and can be customized to show user defined information like revision, configuration or material. eDrawings lets you include the BOM table with the 3D CAD model so you would not need a drawing to communicate the information. 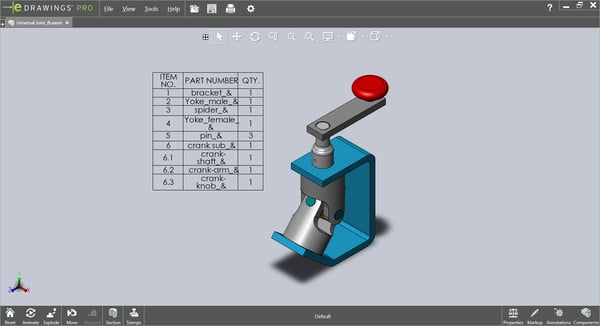 Simulation results and motion studies can be included in the eDrawings file, so distribution of analysis results is simplified. Instead of 2D images, simulation results are represented on a 3D model so they can be utilized just like the SOLIDWORKS model from which they are created. 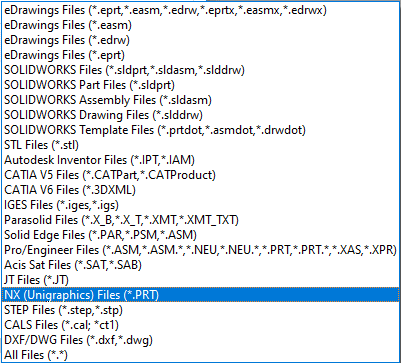 Now, in addition to eDrawings files, the program can open native CAD files both proprietary and neutral. When the files need to be saved, additional formats have also been added, enhancing the functionality of the app. An option to export to stl can be enabled for additive manufacturing or import to other programs.

The viewer can be packaged with the eDrawings files as a zip file or a .exe file so the viewer does not have to be previously installed to view the files. eDrawings can also publish to .html utilizing either WebGL or ActiveX. The .html file can then be published online so users can have a 3D model to view online. The various formats give authors and engineers the flexibility to customize outputs to fit a project or client even if they do not have SOLIDWORKS. 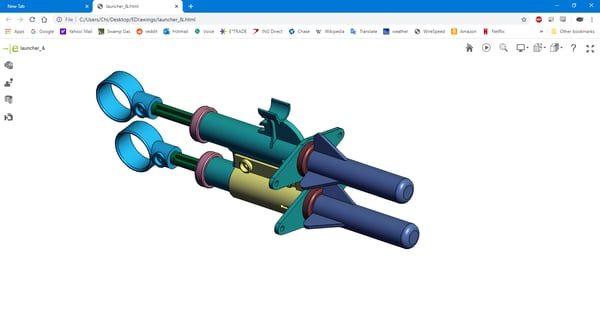 Previously, only the Professional version of eDrawings had tools for markup and measuring. Those features cascaded to the free viewer beginning in 2019. Now the major differences between eDrawings Professional and eDrawings Viewer are API support for scripting, including CAD mass properties, and AR support. API is used when a need has to be repeated over and over again like batch processing. Mass properties like weight, CG and mass moments of inertia that are evaluated inside of SOLIDWORKS are saved into files when viewed by eDrawings Professional. Augmented Reality (AR) is used to give the user another method to view the model and a more immersive experience. 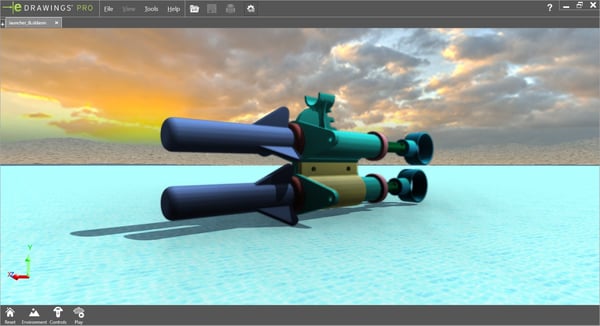 Check out our table below that compares the different eDrawings versions available to you.

Previously, users would have to have CAD to view information that is generated by SOLIDWORKS, but now distribution is made easier by eDrawings. Users can now view CAD and simulation files independent of an existing SOLIDWORKS installation and on multiple platforms. For a product that started as a viewer, eDrawings has undergone significant changes that have added valuable features to enable eDrawings to be used as a publishing tool.

Ready to learn more about eDrawings? Check out all the features and details about the software and how it can help you improve your designs and communication with your teams.