Anyone who has compared traditional FDM (sometimes called Fused Filament Fabrication) to other 3D printing technologies, such as PolyJet, SLA and SLS, has definitely thought at one time or another, “This technology is both inexpensive to print and strong, but I really wish it had better resolution.” In this blog, we explore how to make FDM look as good as other technologies while remaining inexpensive and not impacting overall strength. We’ve printed a horde of Easter Island Moai to play around with the top three ways to smooth PLA parts.

With an average layer thickness equivalent or up to 12 layers to 1, some companies find it challenging to make PLA look "good." To determine the best ways to smooth PLA and improve its end look, we made several Easter Island Moai statues and played around with different post-processing techniques. Among these finishing options, we found coating with epoxy resins and paints, using a heat gun and applying chemical treatments are the top three ways to smooth PLA. 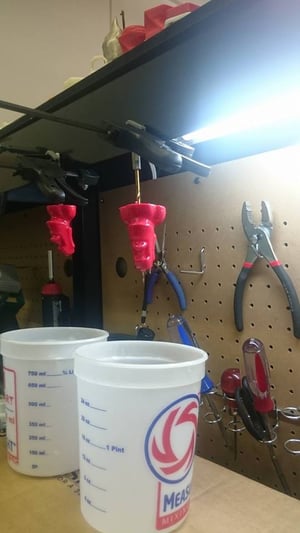 While there are many methods to smooth PLA that can range in difficulty and safety, coating PLA parts in various epoxies or paints to smooth them is by far the simplest and safest. In our experiments, we sanded half of our Moai statues with 320 grit sandpaper and left the remaining Moais untouched to see if there was a benefit to each method.

In our tests, we found that the unsanded two-part epoxy resin finishing and then sanded with primer and paint were two of the smoothest methods with the lowest possible learning curve. That being said, there are some downsides to these methods; the epoxy can still be quite sticky even after it fully dries, and the paint can pool in areas that are undesirable. 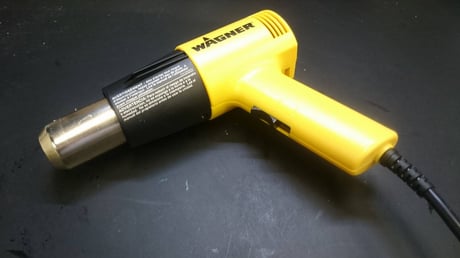 Another straightforward method to smooth PLA parts is to apply fairly high levels of heat to the surface of the model for a short period of time. The learning curve for this method is a bit higher than coating models, as it’s fairly difficult to spread heat evenly on the surface of a model without getting it too hot, causing the model to bubble or melt.

We experimented with a heat gun in an attempt to better control the amount of heat that we were applying to the surface of each model. During this trial, we found that sanded PLA took much less time to start accepting the heat and smoothing. Our unfinished model came out a bit smoother overall, but since it took longer for the surface to start responding to the heat we ended up melting the left shoulder of our Moai.

While this method is quite fast (smoothing both of our Moais only took around 10 minutes total), we’d recommend using proper respiratory protection when pursuing this method and doing it in a well-ventilated space. Melting PLA fumes can have an adverse effect on your health.

During our chemical treatment experiments, we attempted to use Acetone and M.E.K., two relatively safe industrial solvents, as both a vapor and a dip. We had no luck. Acetone and M.E.K. are solvents for other higher-end Stratasys printing materials, but PLA doesn’t react much to them.

After more research, we learned of two other chemicals that people seem to have moderately high levels of success with, which are Ethyl Acetate (often called M.E.K. substitute) and THF (Tetrahydrofuran).  Both chemicals can be applied as either a controlled vapor or by dipping, though time periods of exposure for each chemical can vary depending on a variety of factors such as part size, geometry and chemical temperature.

Please Note: Due to possible safety hazards associated with treating PLA with chemicals (flammability and health risks, especially with THF), we were not able to run these tests in-house. Any chemical smoothing should be done with proper ventilation, preferably a laboratory fume hood, as well as proper safety gear (goggles, gloves and respiratory protection). We strongly recommend doing further research on the application of these chemicals.

And the Best Finishing Option is...

A heat gun! Based on our findings, we rank using a heat gun as the number one option to smooth PLA because of its ability to achieve a great look quickly. At number two, we have coating parts with epoxy resins and paints; this is by far the easiest method and is great for beginners. Last but not least, chemical treatments come in at number three. This is largely due to being difficult to master and safety concerns; however, when applied correctly, this can result in incredibly smooth parts.