By Suman Sudhakaran on September 9, 2019

When you are designing a product, it is important to accurately analyze the varied temperatures to ensure the stability of your model. Thermal stress analysis refers to a static analysis that measures the strains, stresses and deformations that occur with changes in temperature. SOLIDWORKS Simulation enables you to test multiple conditions from static and dynamic response to heat transfer. In this blog article, we use a stainless-steel instant pot to illustrate how to properly utilize the thermal stress analysis feature for improved temperature resistance.

When analyzing stresses due to thermal effects, it is important to know if the thermal load, heating or cooling, is homogenous or non-homogenous. In cases where the temperature is homogenous, i.e. same everywhere in the model, you can directly apply ‘temperature’ listed under ‘External loads’ in a static study. This feature is available in SOLIDWORKS Simulation Premium. It is also a faster approach compared to the two-step method of first setting up a thermal study in SOLIDWORKS Simulation Professional, and then importing thermal study results to run another static study.

In both cases, the reference temperature at zero strain must be specified in the study properties. The mean or average thermal expansion coefficient for the material must also be specified.

However, if the temperature distribution is expected to vary throughout the model, then a thermal study, instead of static, will be required. Additionally, if thermal effects such as convection, conduction or radiation are to be considered in evaluating temperature distribution, a thermal study is required before a static study. The thermal study results need to be imported into the static study to determine stresses or displacement generated from such thermal conditions. Thermal stress analysis can be based on either a steady state or transient thermal study.

In this age of Internet of Things (IoT), thermal stress analysis is becoming an integral part of the product design.To illustrate this, I performed a stress and distribution analysis on a stainless-steel pressure cooker, the Instant Pot. It sits inside the main housing of a Bluetooth-enabled electric pressure cooker. Instant Pot users know that it cooks food up to 2 to 10 times faster.

A transient thermal study was set up to find out the time required to attain the desired maximum temperature and the steady state temperature. A maximum temperature of 245° Fahrenheit was applied to the heating element. Depending upon the material and the medium, convection coefficients of 450 W/m2K was defined on the outside faces of the cooking pot and 40W/m2K was defined on the inside face of the cooking pot. Note that the model was not drawn to the scale and arbitrary values of convection coefficients were used for illustration purpose.

The heat transfer in the contact region was defined using a bonded type of thermal contact resistance of 0 K/W,  i.e. conduction of heat between the inner cooking pot and the heating element.

To evaluate stresses in the cooking pot due to thermal loading, a linear static study was created. An internal pressure of 11.5psi was applied to simulate pressure inside the Instant Pot.  Results from the last step of the transient thermal study was imported into the static study. A required fixture was defined for the heating element and the cooking pot. 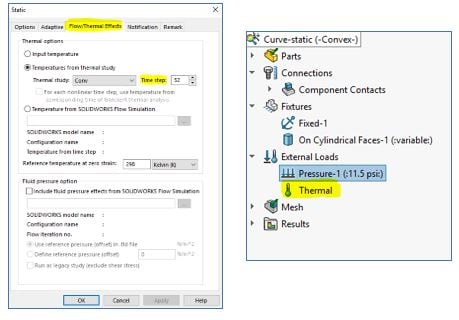 The static analysis shows that pressure and thermal load caused a maximum stress of 121.7Mpa on the bottom outside surface of the cooking pot that is in direct contact with the heating element. The inside surface shows a stress of 87Mpa. The stresses evaluated were well within the material’s yield strength.

Maximum displacement of 0.35mm was seen at curved bottom surface and it stretched out the convex shape. This information obtained from thermal stress analysis is useful if the heating time or weight or topology of the cooking pot needs to be optimized for better efficiency. Use SOLIDWORKS Simulation tools to help you reduce the product development time and innovate faster than ever before.