Since the last time we printed these snow globe ornaments, we’ve seen two technology upgrades to the leading Stratasys PolyJet lineup. The first being an upgrade from the J7 series platform to the J8 series platform, which is now capable in printing seven materials at a time for not only an expanded material selection, but also more possible material combinations.
In addition to that, we also now have a great new “spin” (literally!) on the conventional PolyJet technology in the new Stratasys J55, which prints on a rotating circular platform versus the traditional stationary platen. It actually looks like a giant record player when running, minimizing head movement and allowing the technology to become both faster and quieter at the same time. This machine is capable of printing five materials at a time, always at 18 microns per layer. Since we only need four materials to create full color prints, this machine is also a perfect candidate for recreating our holiday ornaments this year.

The other major advancement that we’ve had since the 2018 holiday season is a release of the new translucent material called VeroUltraClear. This material is similar to standard VeroClear in that it is translucent, but where VeroClear parts can look slightly yellowish if printed glossy or a deep blueish if printed matte, VeroUltraClear parts have better light transmittance and a lower yellowing index, resulting in translucent parts that look much closer to glass after polishing or clear-coating. 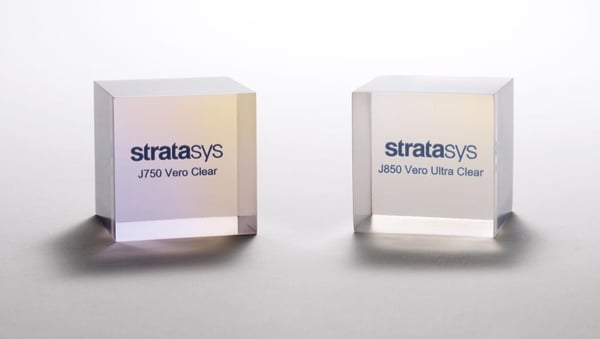 Now, VeroUltraClear prints differently on the J8 series machines than it does on the J55, so let’s break this comparison down by technology by machine:

VeroUltraClear on the J8 Series

On this platform (which includes the J826, J835 and J850) we need to encase our VeroUltraClear bodies with a VeroClear shell. So for our build we printed both variants at 28 micron layer height to get a good apples-to-apples comparison between the two materials. In the below image, we have our VeroClear version with a red scarf and gloves and the VeroUltraClear version with a green scarf and gloves. You can see in the GrabCAD Print Software the two files don’t look too different on the tray.

Even though they may look the same in the software preview, after the print you can tell that there are some noticeable differences between the two if you look closely. The overall clarity on the VeroUltraClear version (green scarf) is much clearer, but we have a ghostly shell of VeroClear that surrounds all of our interior bodies. If raw transparency through your part is the key, VeroUltraClear on this platform is a fantastic option, but if you want to implant complex geometry inside of your clear bodies, the standard VeroClear is a better option in my opinion, as the interior of your models may look less cluttered.

VeroClear on left with red scarf, VeroUltraClear on right with green scarf

Jumping over to the J55, since we need White, Cyan, Magenta and Yellow to create a full color pallet, we can only run one clear material at a time. For our comparison, we ran the VeroClear variant first, followed by the VeroUltraClear after a material changeover. The results were fantastic and I think came out even better looking than our J8 series ornaments! 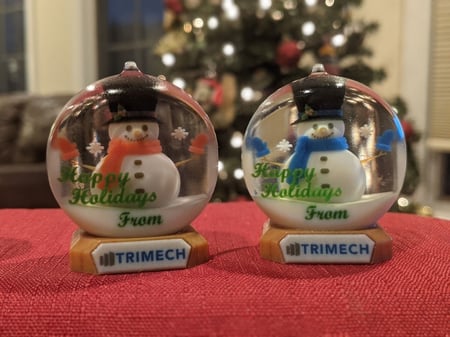 VeroClear on Left with red scarf, VeroUltraClear on right with blue scarf

On the J55, the UV LED light used to cure our resin reacts differently than the UV bulb on previous generations of PolyJet machines, so the VeroUltraClear material doesn’t require a VeroClear shell to cure fully. As a result, on this machine we have a great looking crisp ornament both inside and out, and the advanced properties of the VeroUltraClear material really stand out from standard VeroClear. Looking at the two, our VeroUltraClear ornament (blue scarf) on the right is overall much easier to transmit light through than the VeroClear model (red scarf) and is brighter and clearer as a result! 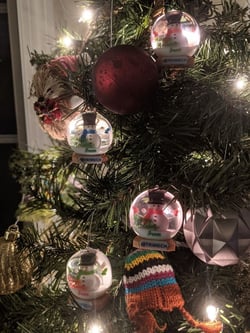 Overall, all of these ornaments look fantastic, and I’d be happy to have any of them on my Christmas tree. On any J8 series machine, VeroClear and VeroUltraClear are both great options. Depending on the application there are certainly scenarios where you may still want to stick to the standard VeroClear material, or conversely utilize the more translucent VeroUltraClear material, so it definitely makes sense to keep both materials in mind when working on clear models. On the J55 though, I think that VeroUltraClear stands out as the overall best option in virtually all applications!

Discover the differences and benefits of different Stratasys PolyJet printers for your prototyping needs. This includes desktop single material printers all the way up to industrial level machines!.