Surprising Ways a Performing Arts Department Can Use 3D Printing

In our most recent article in this series, we went through how 3D printing is influencing and bringing changes to engineering departments across different schools. Other departments like fine arts also have the need to create prototypes, for props and costumes. The show must go on as they say and 3D printing has been instrumental in making sure that happens. In this article, we look at how fine arts departments are including 3D printing in their curriculum and what impact this technology has had when it comes to theatrical productions and theater art classes.

Case Study: The University of Lynchburg

The University of Lynchburg is an excellent example of how 3D printing is making a direct impact on their productions. Christopher Otwell, an Assistant Professor of Design and Technical Director at the University of Lynchburg has been using 3D printing to aid in the acquisition of props and set design. Formerly, when he needed a prop such as an old World War Two era handgun for a production, it could be hard to find and expensive to purchase. Thanks to 3D printing he can produce a very realistic model with little expense. Otwell has even had his students printing miniature models used for set design complete with tiny figurines, props such as heart shaped candy dishes and other hard to find items. "3D printers have just revolutionized theater,” he said. “If you have the time, you can make exactly what you want."

>> Learn more about the University of Lynchburg's project

Another example comes from Penn Libraries, where Eric Baratta, former Lecturer in Theater Arts, started to incorporate 3D printing into theater arts classes. Eric’s student were instructed to revisit the first scene in Shakespeare’s Hamlet and conduct a scene study via Sketch Up utilizing elements of design and composition to build their virtual scenes. Over the course of the semester, the students were able to finalize their designs and, with the help of the Education Commons Librarian Chava Birndorf, students were able to ensure the designs were optimized for 3D printing. Each student was then able to print their various sets and the results were amazing.

At the end of the semester, the class met to review their printed sets and reflected on the assignment. Eric mentioned, “Some of the projects were successful as SketchUp models and this carried through to the model. The simplicity of one student's SketchUp design carried through in the physical model elegantly and we explored nuance by adding lighting from varying directions. Another student’s project struggled for clarity in design intent as a SketchUp model but was a different project altogether as a 3D print. Not only did the designed forms become visually compelling, the concept behind the forms crystallized. I found this pretty remarkable.”

Arizona State University’s Makerspace, located in the Hayden Library, is a space designed for students to collaborate and explore new skills from different disciplines including theater. The ASU students used a MakerBot Replicator+ to create costumes for the production of Ajax, a Greek tragedy. For this play, the students needed to add teeth to their costumes to make them look real. Without 3D printing, they would’ve had to outsource or fabricate these teeth, increasing their budget. With the Replicator+, they were able to obtain a scan of the teeth they needed and 3D print them in-house and added them to their costumes.

“I emphasize to my students that they should use technology to solve a problem,” said Sarah Lankenau, Clinical Assistant Professor of Costume Technology at ASU. “With the maker movement and the emergence of these makerspaces, it’s become such an open and collaborative community.” 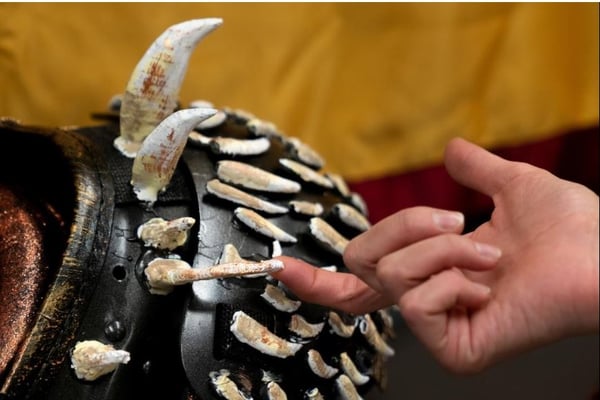 3D printing's versatility has allowed performing arts departments to innovate and save costs in their productions. With the use of 3D software and hardware it's now quicker and more efficient for theater students to create their costumes and sets for their plays.