Surprising Ways an Architecture Department can Use 3D Printing

3D printing is becoming the norm in terms of prototyping for the manufacturing industry. The ability to create functional designs and even manufacture parts in a fraction of the time it would take by using traditional methods is astounding. It isn’t just the manufacturing sector that is reaping these rewards.

The education sectors are also seeing the benefits. These benefits spread across many different departments, but in this blog article, we look at how architecture departments in different schools are benefiting from 3D printing.

Architects generally need to produce scale models of their projects to give clients the ability to see the final product on a miniature scale. These models are typically constructed out of foam core, balsa wood or illustration boards. While they do a good job depicting the project they represent, they also take weeks or months to complete. Since 3D printing is excellent for producing prototypes and parts, it could also be used to create scaled-down buildings, bridges and other architectural details. This natural “fit” means universities around the country are starting to adopt the technology and training students to design models in 3D and print them on the spot.

In this case, the State Capitol Police approached WVU Tech and requested a scale model of the Capitol campus to aid in planning security for visiting heads of state and other high-profile visitors. The previous model they were using was from 1974, and through the decades, several buildings and locations on the grounds had changed.

The original intent was to build the tabletop model with traditional materials such as foam core, balsa wood and illustration board. Design work began and virtual models were created of the major buildings of the Capitol’s campus. About a year and a half after they started the project, the professors received a grant to purchase a Stratasys Dimension 3D Printer (the predecessor to the F123 family) and began using it. The Dimension 3D Printer significantly accelerated the project’s progress. The two professors and a small team of students completed the final 4 x 4-foot model just six months after the Dimension 3D Printer arrived. The Dimension printer also gave the team the ability to create detailed models they previously would not have been able to include with traditional methods. The final model contained:

This highly detailed campus model now allowed Capitol Police to plan security far more quickly and effectively than ever before.

“The campus model is a great resource for security planning, it saves us significant time and energy when planning for special events and also in evaluating overall security operations.”  said C. R. “Jay” Smithers, Director of the Division of Protective Services.

It isn’t just new designs in architecture that 3D printing is revolutionizing. Combined with 3D scanning, 3D printing can have a significant impact on historic preservation as well. Universities are now scanning exterior details and features that can then be turned into models/tooling used to recreate or preserve the designs. 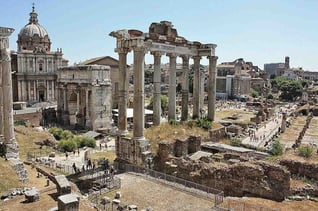 Digital Historical Architectural Research and Material Analysis (D.H.A.R.M.A) is a research team based at the University of Notre Dame School of Architecture. This team travels around the world to document different historic buildings and monuments and uses the data they gather to create models to aid in the preservation and reconstruction of historical architecture.

Further plans for the scanning process include scanning historic buildings listed in the US National Register of Historic Places. The team has additionally used 3D scanning and 3D printing at sites around the world, in places such as the Taj Mahal in India and the Roman Forum. The data gathered in these scans has been invaluable for aiding in the preservation and reconstruction of these sites.

The use of scanning and 3D printing has made documenting old designs and creating new ones simple and efficient. By incorporating these technologies into architecture departments, students are able to capture details and produce models that would otherwise be impossible or be incredibly time-consuming.

Are you curious about which 3D printer could do the trick for your architecture department? Download our Entry-Level 3D Printer Buyer's Guide for Education.