Surprising Ways a Criminal Justice Department Can Use 3D Printing

Throughout this series of articles, we have looked at how different departments across multiple universities have used 3D printing as part of their curricula and projects. So far, we have explored areas such as Performing Arts, Engineering and Chemistry. With its versatility, 3D printing has impacted areas that one wouldn't normally consider when it comes to implementing these technologies. Did you know that some universities have used 3D printing to solve cold cases? Let's look at some examples throughout this article in our series.

In 2015, the Ohio State University started the Digital Union Free 3D Printing Program, through which students and staff from any department could have free access to 3D printing. In 2016, the Attorney General at the Ohio Bureau of Criminal Investigation (CBI) partnered with the program to identify the remains of a Jane Doe, found earlier in that year.

Traditionally, facial reconstruction is done by applying clay on top of the skeletal remains, but this can damage DNA evidence. To preserve the evidence for this case, Samantha Molnar, a forensic artist in the Police Department, contacted the university's program to 3D print the skull and then proceeded with the facial reconstruction.

"The remains are considered the evidence, and we are sensitive to handling or building upon them because they were part of a living person at one time. 3D printing is a great tool for reconstruction because it preserves the original skull while still providing the form I need to complete an accurate reconstruction," said Samantha Molnar. One of the program students used the CT scan of the skull to create a 3D CAD file and used a MakerBot Replicator to 3D print the skull. Once the model was fleshed out with clay, images  were released to the public and provided for quick identification of the victim.

>> Learn more about MakerBot and their most recent platform, the MakerBot Method

In the summer of 2016, the local police contacted a team specializing in biometrics at Michigan State University, led by distinguished professor Anil Jain, to unlock a deceased victim's phone to investigate his murder further. Professor Jain and his PhD student, Sunpreet Aror put their research to the test and tried to use 2D printed fingerprint replicas to unlock the murder victim's phone.

Human skin is conductive, and scanning devices pick up the bits of electricity produced by the fingerprints. 2D targets are not adequate to simulate how users interact with the reader during the fingerprint capture process. As a first test, the team coated the 2D prints in a special conductive paper and they realized that it was challenging for scanning devices to read them. They decided to expand their research and created a 3D target in the form of a 3D printed hand that could be worn to mimic the fingerprint capture process.

The hand's 3D design was divided into six parts: four individual fingers, the thumb and the remaining middle portion of the hand. Through a 3D software, they embedded the 2D fingerprint characteristics into the 3D design of the hand. Professor Jain and his team then used the Stratasys Objet 350/500 Connex 3 PolyJet printer, which slices the parts into 2D horizontal layers and prints them layer by layer. They used opaque and translucent rubber-like materials like TangoPlus, which can simulate human tissue and provide the same feel as a human hand. In addition to creating this human-like texture, these materials are also appropriate for imaging with optical readers. 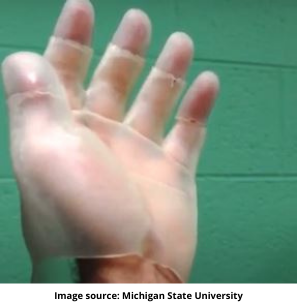 "Like any optical device, fingerprint and hand scanners need to be calibrated, but currently there is no standard method for calibrating them," said Jain. "This is the first time a whole hand 3D target has been created to calibrate fingerprint scanners." The experiment was successful, and they were able to unlock the victim's phone. Professor Jain received a Civilian Citation "for meritorious actions which significantly aided in the protection of life," and the MSUPD presented him the Meritorious Service Award.

Other areas that contribute to solving criminal cases have also benefited from 3D technologies, which are not limited to 3D printing. The use of other devices such as 3D scanners, in conjunction with 3D printing, has allowed for the reconstruction of crime scenes and can bring even the minutest details back to life.

One of our clients, HD Forensics is a great example. Traditionally, they were handed a pile of bones to examine and would have to head to the crime location to try and gather as much detail as possible. This left the opportunity for mistakes and the possibility for the crime scene to be corrupted over time. Although they could process the crime scenes using images and a written description, HD Forensics knew there had to be a better way to capture the details needed, so they started looking at 3D scanners. After exhaustive research, they purchased an Artec Space Spider from TriMech. This would allow highly detailed scans of crime scenes and bones for a catalog to help forensic anthropologists across the world.

>> Download the full case study to learn all the details

Mercyhurst University in Pennsylvania has partnered with HD Forensics to incorporate forensics training to students and professionals involved in the recovery and processing of human remains. They host a variety of courses throughout the year that focus on analyzing accident sites to gather as many details as possible to solve potential criminal cases.

If you want to keep your Sherlock Holmes hat on, we encourage you to watch our on-demand webinar, 3D Scanning in Criminal Justice Education. You'll learn about more ways in which universities and colleges are teaching how to use these technologies to students heading into the industry.