The third leg of the SOLIDWORKS Visualize Contest asked its contestants to create a 360° high-resolution rendering of an interior space. I had already seen a number of Visualize renderings highlighting furniture and architectural spaces, but I wanted to try something a little different– art! 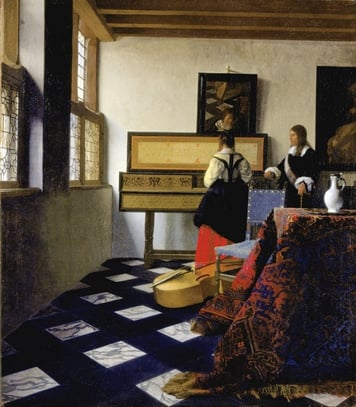 Like many artists in their lifetime, Johannes Vermeer (1632-1675) died in debt and largely anonymous. Contributing to Vermeer’s poverty and early obscurity was the fact he only produced roughly 45 paintings in his 35-year career. It wasn’t until centuries later that Vermeer’s work really began gaining public attention. What has captivated critics and admirers alike has been his ability to capture the behavior of light so accurately. That said, what better artist to test the capabilities and environmental lighting effects available in SOLIDWORKS Visualize 2018.

To begin, I chose a target painting to capture, The Music Lesson (c. 1662-1665). Besides being a prime example of Vermeer’s sublime lighting, The Music Lesson was also the subject of a 2013 documentary, Tim’s Vermeer. In the film, inventor Tim Jenison conducts experiments to painstakingly recreate Vermeer’s masterpiece. Similarly, I hoped to capture Vermeer’s masterpiece in SOLIDWORKS as closely as possible, but instead of pigment, I would use pixels.

First, I needed to model the objects in the painting as accurately as possible. I only had the painting as a reference, so I didn’t have any dimensions of the environment, furniture or instruments. I could guess, but I wanted the objects in the room to be positioned and sized as accurately as possible. To get the scale and dimension of objects correct, I added The Music Lesson painting as a background image to the scene of a SOLIDWORKS assembly file. I then added a very rough model of the room’s interior to the assembly and set up a SOLIDWORKS camera in the room. Using the image in the background, I attempted to adjust both the camera position and its focal length to line up the edges of the room with the background image. This camera view was critically important. Once dialed in, I revisited this reference camera view to help adjust the final position, scale and size of the objects in the room. 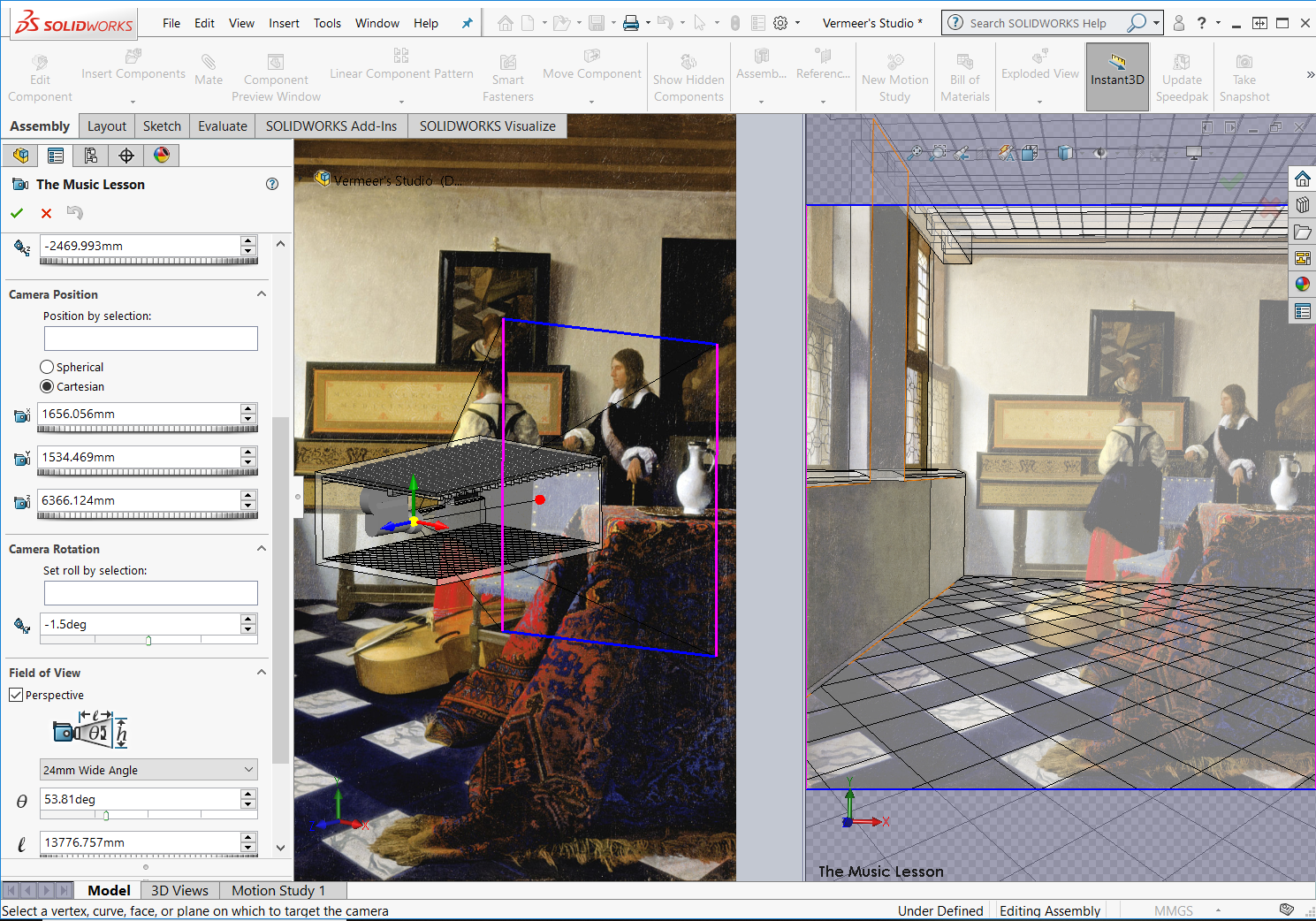 As an example, the virginal (a harpsichord like instrument) was originally very roughly modeled, but I still took care to make sure the sizes of the major parts were somewhat proportional. After roughly positioning it into the main assembly and consulting the reference camera view, I could see I modeled the virginal much too large. I then scaled and modified the virginal’s dimensions and positioned until it lined up with the painting in the background. 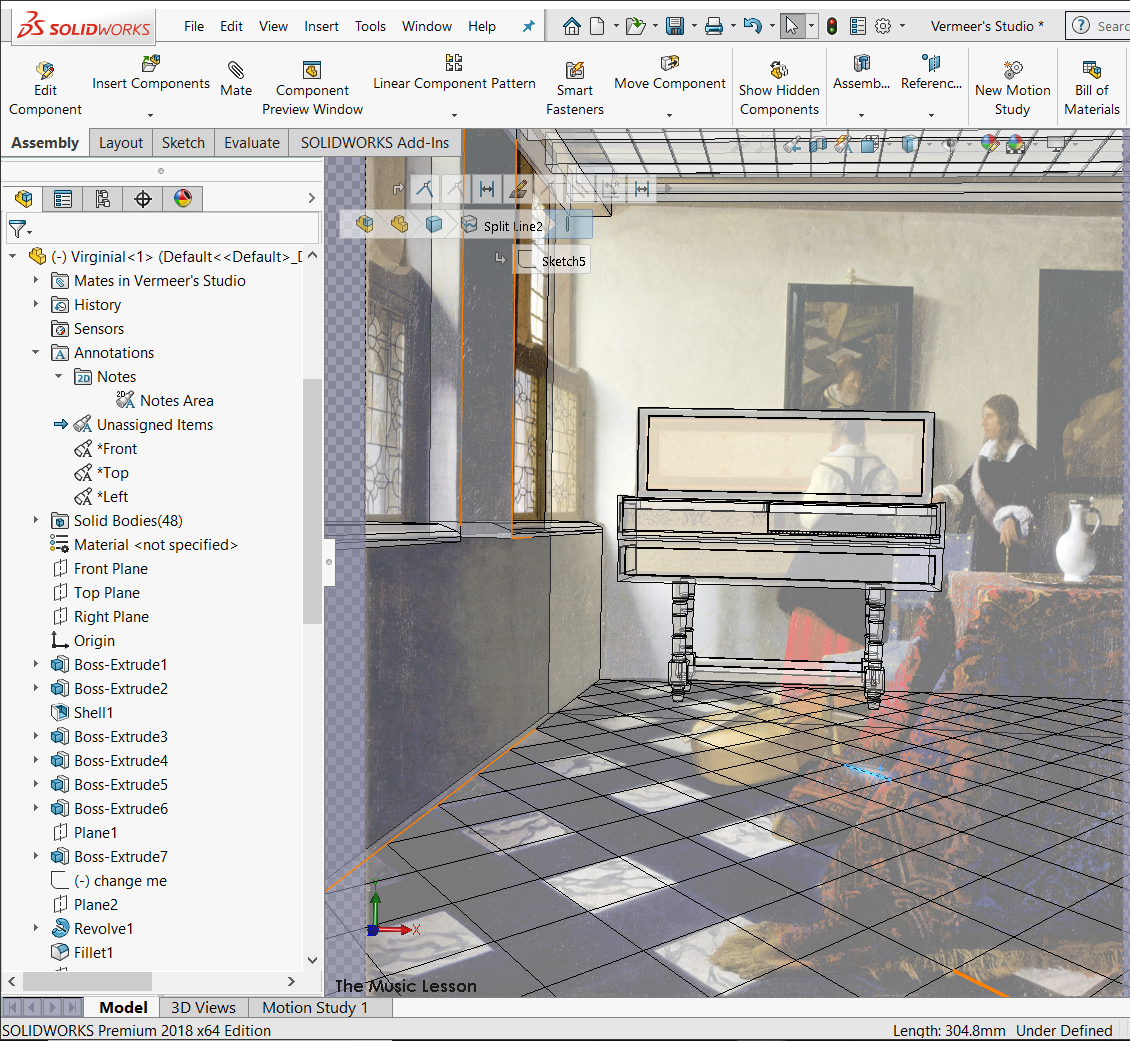 Though tedious, the process was made easier with the parametric and associative nature of SOLIDWORKS. I then repeated the process for each of the objects in the painting. The table, windows, pitcher, plate, musical instruments, windows, rooms, ceiling beams and wall hangings were all modeled this way. This was a lengthy process. 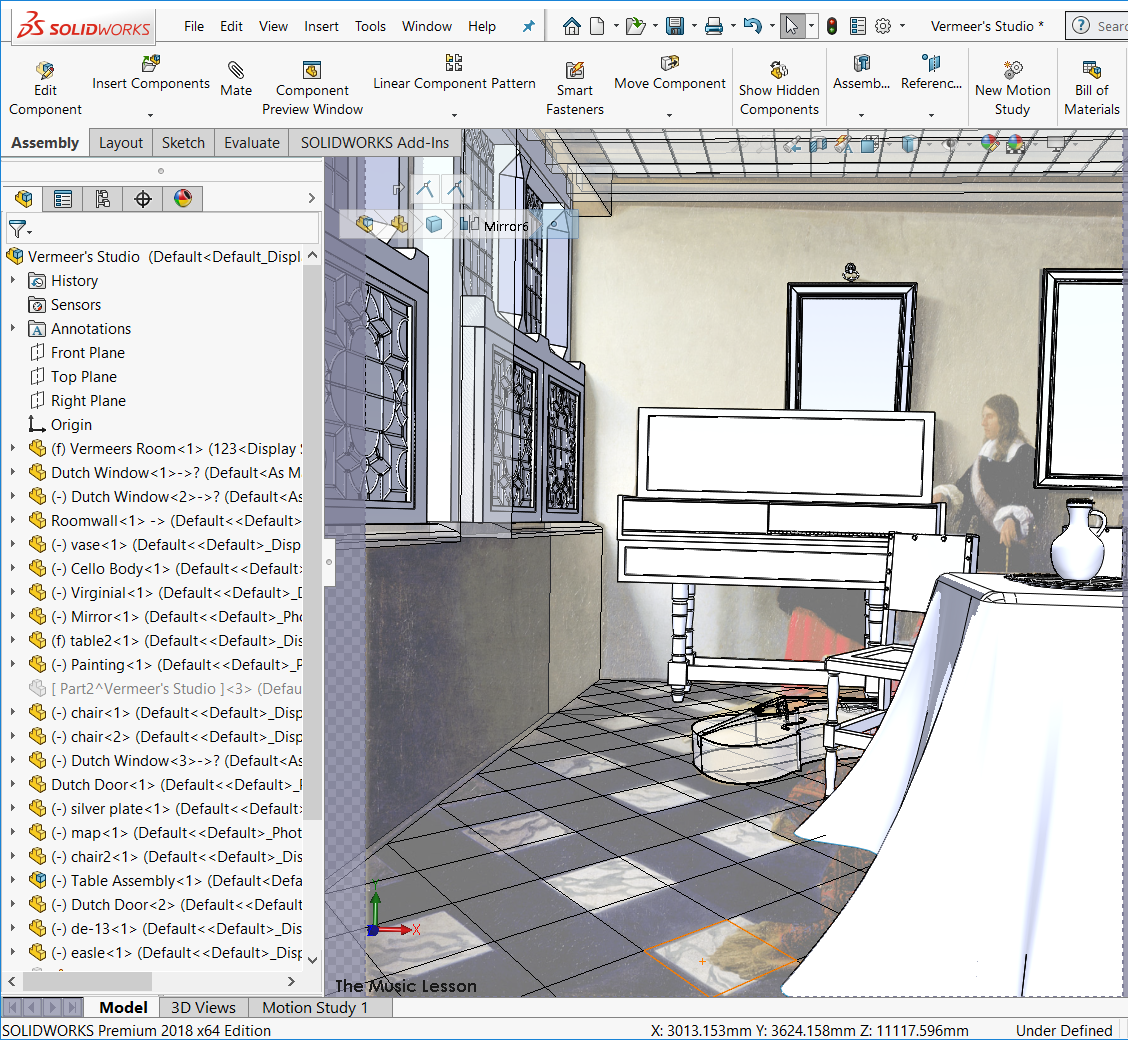 To capture the grandeur of the original painting, texture image files were needed. Texture images can be used for both SOLIDWORKS Appearances and Decals to give the modeled objects added depth and realism. The stenciling and patterns on the virginal, hanging paintings and draped carpet were handled with decals, while objects like the patterned walls, floor tile and wood grain used appearances.

Using custom decals also provided an opportunity to test some of SOLIDWORKS Visualize 2018’s enhanced capabilities with importing a greater variety of mapped SOLIDWORKS decals. In the past you could only import decals that had been mapped with a “projected” mapping option, now the other mapping methods are available to import. 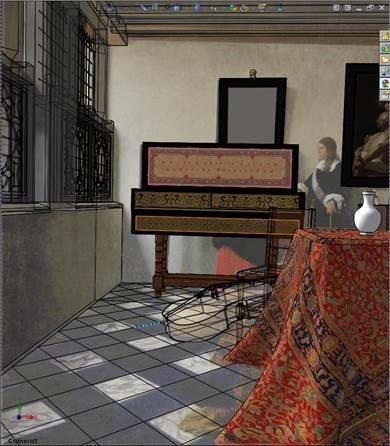 With nearly all the objects modeled, (I left the people out) I simply had to export my SOLIDWORKS model into SOLIDWORKS Visualize. Not only would this bring in the geometry from SOLIDWORKS, but also the appearance, texture, camera and lighting information I had applied to the SOLIDWORKS model. 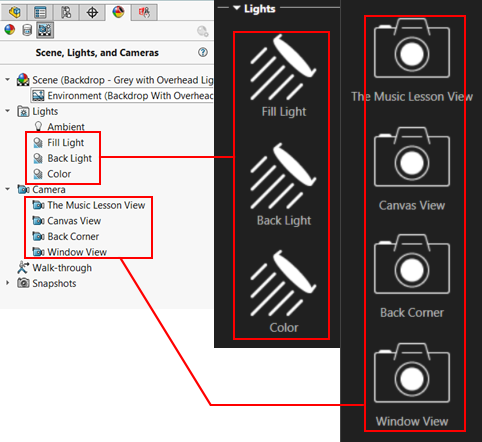 Though SOLIDWORKS’ built-in rendering tool, PhotoView360, does a fair job of rendering models, SOLIDWORKS Visualize is much stronger at capturing how light behaves, especially on interior spaces. In previous revisions of Visualize (and formerly BunkSpeed), the user would need to toggle an option when modeling interior environments. Apparently, this toggle would enable the system to handle lighting in interior places more accurately.  In SOLIDWORKS Visualize 2018, the option is no longer present but automatically applied when running a rendering in Accurate mode.

To further assist with the exterior light, I applied a sunlight environmental map. The sunlight environmental map uses global positioning, time of day and date, to simulate accurate lighting conditions for the model. For nerd bonus points, I located Vermeer’s studio in Delft Holland on Google Maps and input the global coordinates into the sunlight settings in Visualize to see what sunlight lighting conditions SOLIDWORKS Visualize would give me for my rendering.

The first pass rendering displayed the room extremely dark. This is not uncommon when rendering interior spaces in SOLIDWORKS Visualize. There are a couple of solutions to correct this. Similar to taking a photo in real life, you can either increase the intensity of the light or adjust the exposure to the film/sensor. To adjust the exposure, I activated SOLIDWORKS Visualize’s post-processing options to increase the rendering exposure. 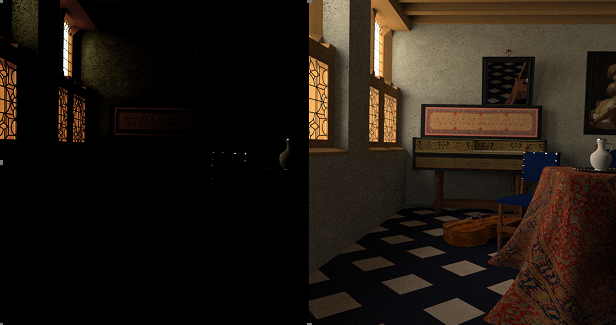 Also, because we’re dealing with interior lighting, there’s more noise in the image. The noise can be reduced by increasing the number of rendering passes in the image. Rather than the default 100 passes, I opted for 1,000 rendering passes to get an ultra-sharp 6K image. With these settings, it took an incredible amount of processing power and time.  Fortunately, I could render the image offline on a dedicated rig in much less time.

Once I had finished my rendering, I was reminded that the SOLIDWORKS Visualize Challenge was to create a 360° image, not just a model of a space. Like a childhood diorama, I recreated the corner of The Music Lesson, but ignored modeling anything else! The room was comically vacant except for the one carefully composed corner.

After a brief sob on my oversight, I then went to task modeling the rest of the room. Taking inspiration from historical references and other Vermeer paintings, I attempted to capture the materials, furniture and props that Vermeer may have kept in his studio. 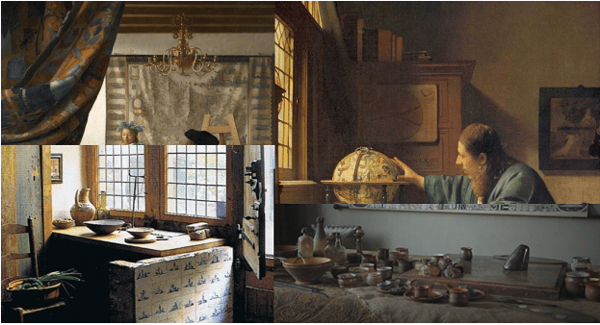 I leaned heavily on content from 3D Content Central, GrabCAD and other model repositories to help me furnish the environment. This saved me tons of time. I, of course, modeled and textured objects that I couldn’t find anywhere else. The studio was still a tad sparse for my liking, but with the looming deadline of the competition drawing near, I cut my modeling efforts short. Like many engineering projects, the deadline dictated its release. 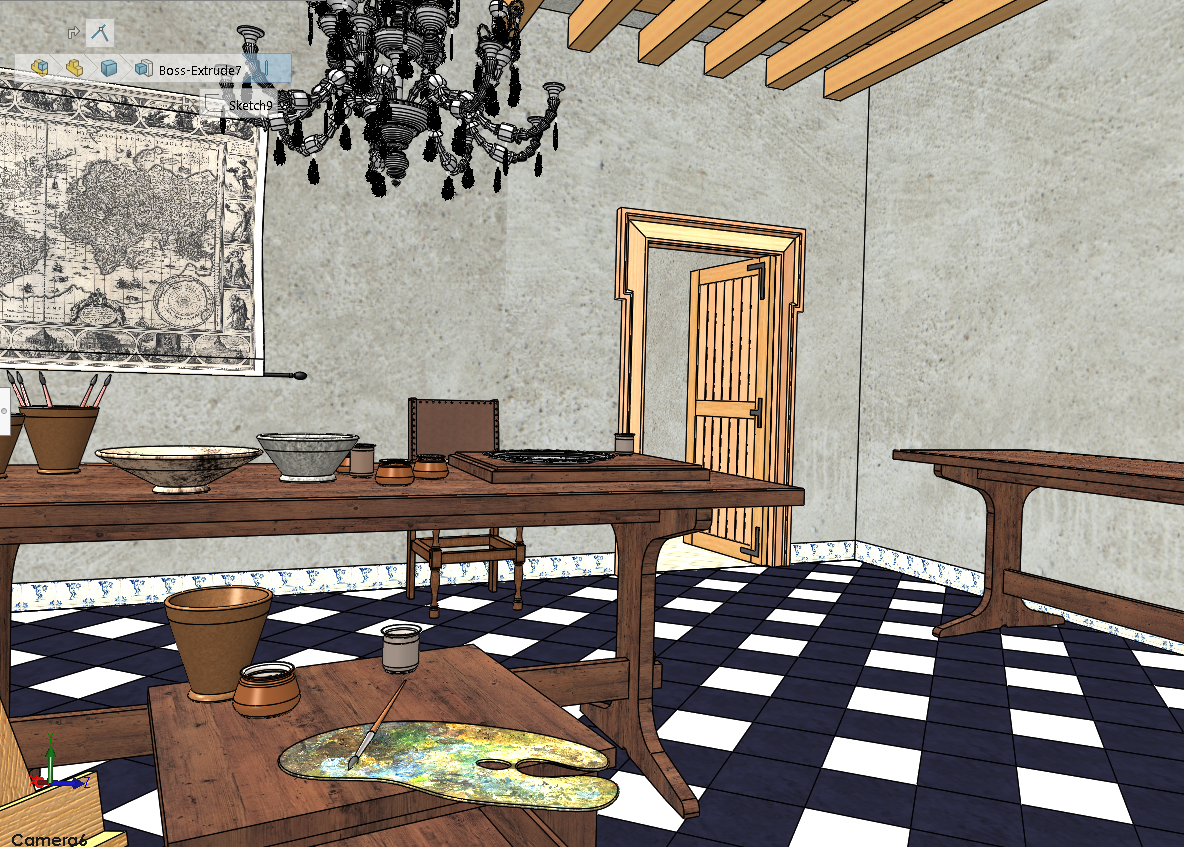 SOLIDWORKS Visualize makes it a snap to create a 360° view. I reused the initial camera view position I used for my The Music Lesson rendering and created a 360° camera. Because I was using the camera position that I had used for The Music Lesson, this would allow the viewer to pick out the image from the 360° panoramic image . As a finishing touch, the 360° camera can also incorporate stereoscopic settings to generate 3D 360° images. These can be used in VR headsets like Oculus, HTC Vibe and Google Cardboard. Once it's sent to the rendering rig, it took nearly 40 hours for the 6K stereoscopic 360° image to finish rendering. 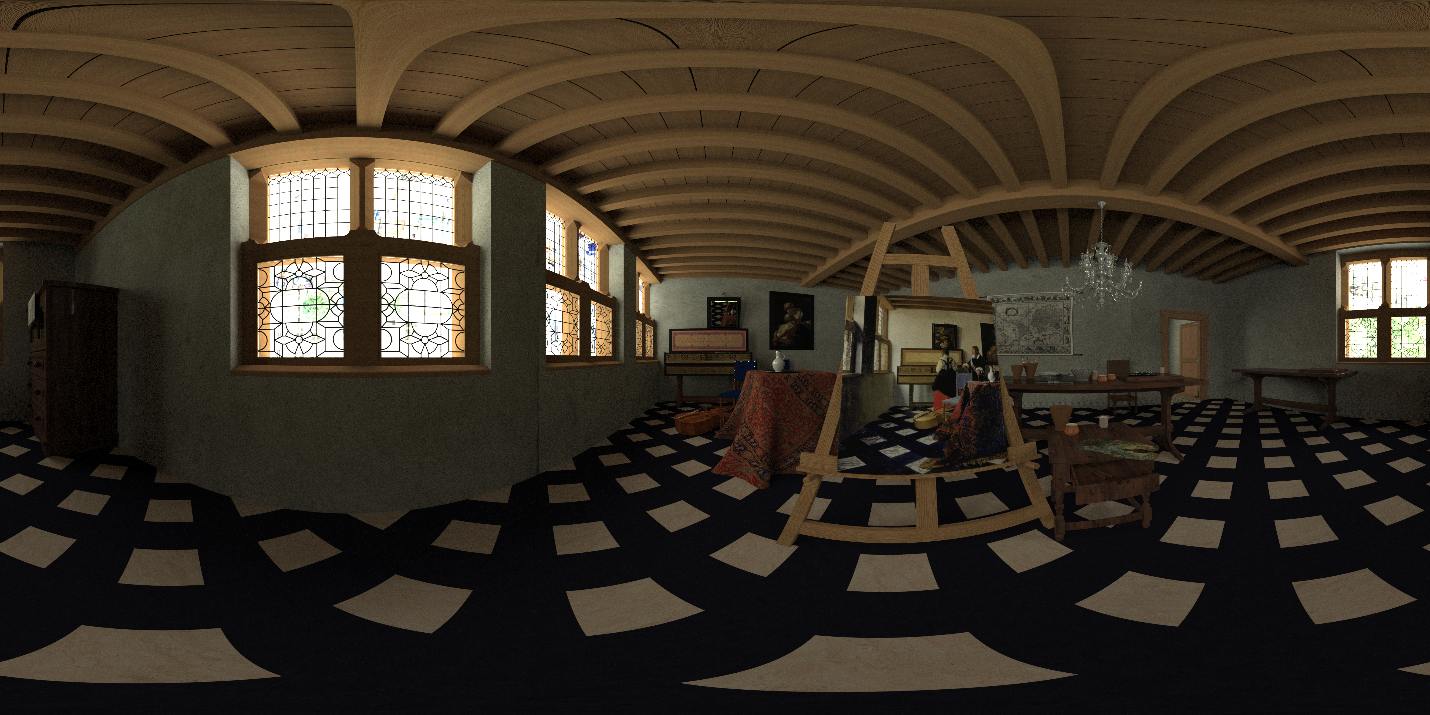