For mechanical designers, SOLIDWORKS Electrical is the yin to their yang. In one cohesive environment, Electrical CAD (ECAD) and Mechanical CAD (MCAD) designers can work side by side, innovating easier and getting their designs out the door faster than ever before. To all the MCAD guys and gals out there here’s why SOLIDWORKS Electrical is such a powerful tool that enables productivity and collaboration between you and your ECAD counterparts. 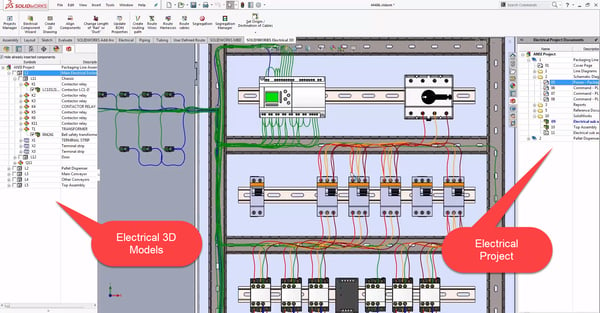 As a mechanical guy myself, it always seemed like the ECAD designs were done in some faraway place. Honestly, I almost felt like I needed to get my passport stamped whenever I wanted to go see them, and I imagine I’m not alone in feeling that way. So why is that? Well, not only is electrical a different language than mechanical, it uses a different alphabet. While mechanical engineers and designers use 3D features to make solids and surfaces, the electrical guys use lines, symbols and images to represent their designs. Think of SOLIDWORKS Electrical as a seamless platform that integrates both mechanical and electrical. 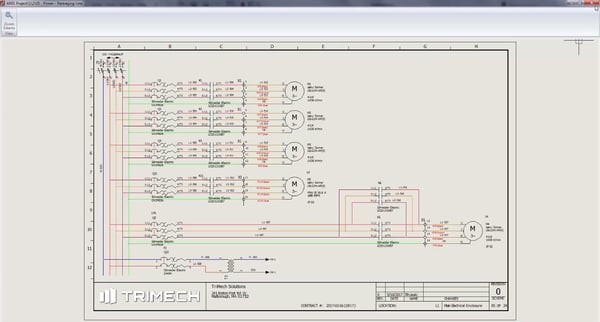 Those colored lines and symbols are electrical lines and real items that are associated with a part or product. SOLIDWORKS Electrical knows that, which means if an electrical designer puts a symbol on their drawing the mechanical guy will be alerted and then can add the right 3D model to the design. It’s that simple. This is the underlying technology powering the next level collaboration that best-in-class companies are leveraging.

So how exactly does this work? The two separate applications, SOLIDWORKS CAD and SOLIDWORKS Electrical are connected by a “collaboration server” which maintains connectivity between the applications. This collaboration is seamless and constant. This means that you as a user won’t see it but you an be 100% certain you are working on the same model. The collaboration server is the brains behind the operation. It is what takes the 2D images and lines on an electrical schematic and turns it in to a 3D model. It’s what speaks both languages of electrical and mechanical.

As shown in these images, when components are added to the electrical schematic, they appear in the SOLIDWORKS feature tree so you can easily add them to your design. They can even be added in bulk to speed up the design process. What’s more is, because of the collaboration server the images and symbols dropped on an electrical schematic can leverage the intelligence of the 3D model like mate references and other properties that makes building an assembly in SOLIDWORKS very easy.

As you can image this can even make adding things like wires and cable harnesses a breeze. Since the components are placed in their actual location in 3D space, you will get an accurate wire cut list with exact wire lengths. This happens with no added efforts, it’s just a result of modeling in SOLIDWORKS.

Ready to learn more about Electrical Design? Click on the button below.