SOLIDWORKS Beyond the Desk

One of the many aspects that we at TriMech like to pride ourselves on is our commitment to training. Whether you are looking to maximize the benefits of your SOLIDWORKS 3D CAD software or Stratasys 3D printer, we have the certified instructors and classes to help you improve your skill-set.

This is a story about how TriMech training brought excitement and bonding to one of our client's families. 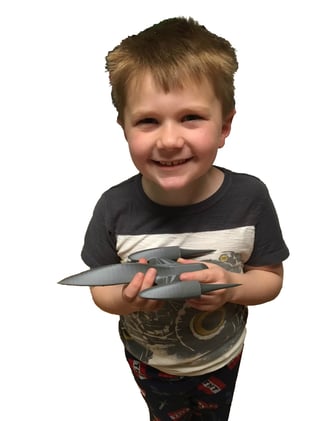 As I’m mentally gearing up to teach SOLIDWORKS Surface Modeling for the several dozenth time, a new face briskly strides into my training lab, picks a seat centered in my field of view, and smiles. His eyes were bright as he sat forward in the chair like someone who had just been told we were going to make “big kid” projects which included explosions and flying.

One of our clients, Brian Bunnell currently works in Duncan, SC. Just after I handed Brian his training manual for the next two days, he says “I 3D printed that rocket ship we make in the SOLDIWORKS Advanced Parts class for my son!  Wanna see??” His excitement is through the roof.  My morning’s frustration with the commute through downtown Baltimore’s traffic is immediately diffused as he fiddles on his phone to pull up the photo. This class is going to be amazing.

I had the serendipitous privilege to meet Brian and hear his stories (including how he built a drivable electric tank for his son!). With his blessings, I hope you enjoy getting to know him as much as I did.

Why did you bring that edition of Make Magazine to class?

Brian was featured on the front page and in the article: “Build Your Kid a Drivable Electric Tank” for the January 2016 edition of Make Magazine.

“When I was 4 years old, my dad built me a train that I could get in and drive; it was the coolest thing on the block! It was comprised of a trash can for a boiler, PVC sewer pipe for the smoke stack and cylinders, plywood wheels, and it was powered by an automotive windshield wiper motor and a motorcycle battery. It ran on PVC pipe rails, and had a “flat car” to pull my friends along behind me.

I have great memories of that train, and I wanted to build something for my son of a similar magnitude. Initially, I was going to build another train, but then I decided that I wanted to do something different, but equally as memorable.”

Check out Brian’s article for instructions on how to build your own electric tank for your kid! If you scroll to the comments, he has some insight for an adult-sized version (because we’re sure that’s your next question).

The basics: How long have you used SOLIDWORKS?

I have been working with SolidWorks for around 16 years.  I basically learned the fundamentals of it on my own by just diving in and playing with it.

Any personal suggestions for new users on how to shorten the learning curve?

For new users I would certainly recommend that they start out with your SOLIDWORKS Essentials class.  Then after that, they really need to just dive in and start modeling, experimenting with the software.  Like learning a foreign language, I feel that with some training under your belt the best way to learn SOLIDWORKS is through immersion. You have to get in there and use it.

How do you keep going as a seasoned user? After 16 years, surely nothing's surprising!

New and experienced users alike need to push themselves to try new modeling approaches and more complicated designs. Though, they need to understand that they will run up against walls, their models will fail sometimes, but as with a lot of things in life, this is how you learn.  The “failures” force users to dive deeper, to look for different ways to approach a problem.  As my Surface Modeling instructor, Tracy Wettig, stated several times in class, there are many ways to model something in SOLIDWORKS.  Some are simpler than others while some are more complex yet may capture important design intent. There is a point at which a new and, in some cases, an experienced user should pursue a specific training class to aid in a deeper understanding of the software.

Why did you choose to enroll in Surface Modeling?

Recently I had the privilege of taking TriMech’s SOLIDWORKS Advanced Part Modeling class. Though it is interesting to note that I had originally intended on only taking TriMech’s Surface Modeling class, I had a very specific need at my work that could only be accomplished through surface modeling techniques. However, when reading about the class on TriMech’s website I saw that it had a prerequisite of the Advance Part Modeling class. My initial reaction was that I have a ton of experience with the software, I really don’t need this part modeling class. Though, curiosity got the best of me so I checked out the breakdown of the topics covering in the Advanced Part Modeling. Very quickly I realized that I really didn’t know as much as I thought I did and I could greatly benefit from this class prior to taking Surface Modeling.

Was the Advanced Part Modeling detour of any value?

How has all the training help your personal growth as a SOLIDWORKS master modeler?

Any personal shout-outs to your experience with TriMech Training?

Along with the great content, I credit my Advance Part Modeling instructor, Chang Lee, and my Surface Modeling instructor, Tracy Wettig, for the awesome, eye opening experience I had attending their classes. They were both supportive, enthusiastic and incredibly knowledgeable. Both Chang and Tracy took a personal interest in the students making us feel welcome and comfortable. They both taught all the material to be covered while being mindful of the pace at which the various students were picking it up. I would like to personally thank them both for the awesome experience I had in both classes.

Inevitably, the class came to an end and we said our farewells. After having followed up with Brian after the Surface Modeling course, I truly feel he walked away having learned the tricks of how to make the equivalent of any loud, flying contraption his “big-kid-at-heart” mind desires. 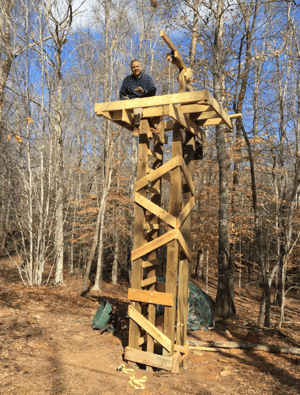 Brian Bunnell is currently working on writing a book: Mechanical Engineering for Makers (A Hands-On Guide to Designing and Making Physical Things). Here are some sneak peek images of some projects included in the publication: 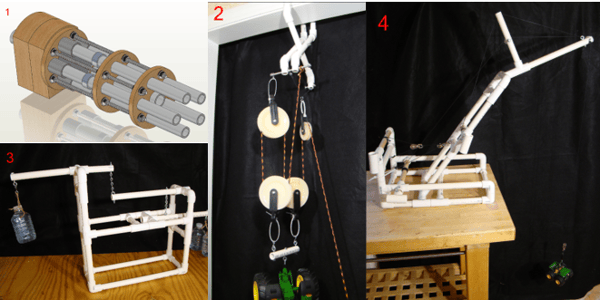