Every once in a while we run into a client that is hesitant to make the investment in a SOLIDWORKS software solution. Even when their design method includes drafting by hand, they have become very accustomed to what has always worked for the company — and are reluctant to change. In this client story, the reduced design time alone was enough to justify implementing SOLIDWORKS Electrical. 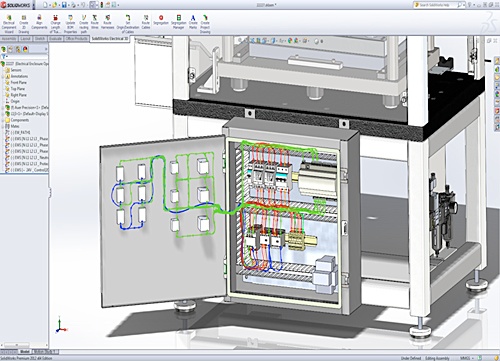 Not long ago, we came across a client who was very happy with their existing electrical schematic design process. Their team had been drafting the electrical schematics by hand with Google Sketch Up for the past 15 years before they agreed to see a demonstration of SOLIDWORKS with TriMech.

In fact, the lead Electrical Engineer wasn’t even interested in SOLIDWORKS Electrical and claimed what he currently used worked just fine. At the time of this discussion, we discovered that it would take the company 1-3 weeks to complete their schematics by hand. To add to that timeline, if there was a design change they would need to start the entire project over again.

SOLIDWORKS Electrical for the Win

After we showed their electrical team a demonstration on what the software could do, the same individual who said he would never use our software went against his first statement. He decided that he did not want to complete another project unless the company moved forward with SOLIDWORKS Electrical.

The client's entire electrical team has received training along with an Electrical Implementation. On top of this, any new hire also attends training. Their team has made it very clear that the time TriMech has spent with them and the use of SOLIDWORKS Electrical has changed the way they create their internal Electrical Schematics.

Did this story resonate with you? If so, learn what SOLIDWORKS Electrical can do for your bottom line by simply request a demo from our team. You might be surprised by how much time you can save.