Our Q&A blog series looks at different members of our team and their perspective on the most current 3D printing and SOLIDWORKS CAD technology. This month’s Q&A features Andrew Barnes and SOLIDWORKS 3D CAD. 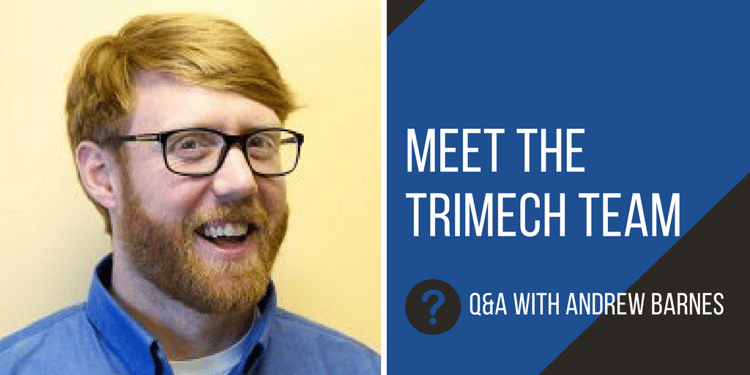 1. Describe yourself in five words or less.

2. What are you most passionate about?

Snowboarding. When there isn’t snow on the ground, I am waiting for snow to fall. There is an indescribable feeling that I get flying down a hill on a metal edge that I can’t achieve doing anything else.

3. Outside of work, where can we find you?

Hopefully on the side of a mountain snowboarding, mountain biking or backpacking.

4. What's your role at TriMech and your background in engineering?

I have a degree in Mechanical Engineering. After school, I worked with AutoCAD 2D for layout designs and then AutoCAD 3D to model large coke furnaces from hand-drawn blueprints dating from the 1930’s (engineers used to have good handwriting). These days, I am an Elite Application Engineer (which basically means I passed a whole bunch of certification exams). My specialty is weird, swoopy shapes. Basically, if you have a question that involves SOLIDWORKS surfacing, I’m your guy.

5. What's the inspiration behind your TriMech Truthseekers video series? People are loving it so far!

We obviously love shows like Mythbusters and YouTube channels like Smarter Every Day. I think it would be hard to find an engineer that doesn’t. But Michael Kalin is actually the one who came up with TriMech Truthseekers. He does all the simulations and writes all the scripts…I mean, the totally unrehearsed, natural banter between us. He basically just shoots me an idea about recreating a myth in simulation, and I usually say “that’s an awesome idea”.

>>> Click Here to Watch The Science of the Slapshot

6. After spending much of your career in engineering, specifically in CAD, what would you say is the biggest change you’ve seen in the industry?

The current move toward Model Based Definition is huge. So many problems I had in my past life using 2D AutoCAD (I break into cold sweats when I think about it) had to deal with drawings not matching real life or a drawing that is really difficult to interpret. The entire point of 2D drawing is to convey information from the designer to the machinist, the assembler or the end user without having to add any information outside of that drawing. If the machinist has to ask you what that one dimension is referencing, it’s no big deal. But if it’s seven years down the road and you're no longer available, it’s a big problem. So the ability to have a 3D model that’s interactive is huge. It takes away any guess work that there may have been.

7. What is your favorite thing about SOLIDWORKS 3D CAD?

Parametric capabilities. You change one thing, once. Then, it changes in the drawing, the assembly, the subassembly, the mirrored part, the simulation and the technical manual. A change that would have taken the better part of a day back in 2D only takes 30 seconds in SOLIDWORKS.

8. Can you explain what competitive advantages SOLIDWORKS 3D CAD offers to clients’ workflows?

SOLIDWORKS is the industry leader because they listen to their users. People put in enhancement requests every day that suggest how the program could be better. Those translate into around 250 enhancements every year to make the user experience easier, more intuitive and faster.

9. What is your favorite accomplishment, experience or story about SOLIDWORKS Simulation?

The other day I was at customer’s facility. They are being told by the powers that be that they need to move from their existing 3D CAD system to SOLIDWORKS. They asked if they could see me walk through some modeling, so they could get a feel for how different it was going to be. Multiple times I was stopped by them saying “Wait, that’s it? In our old program that would have taken a bunch of other steps!”

They started that meeting prepared to swallow a bitter pill and left surprised and excited to move to SOLIDWORKS.

10. How does SOLIDWORKS Simulation impact your work, the industry, other 3DP or CAD technology? Where do you anticipate it going from here?

I want a cheap 3D printer that sits on my tool bench in my garage right next to my vise and my sawzall. When that random part on my lawnmower breaks, I will be able to model up a replacement (or maybe get a 3D scan from my phone) and print it out on the spot rather than having to wait two weeks for them to ship the part from some warehouse in California. Also… Where are my hoverboards? We were promised hoverboards!

For more insight from Andrew, watch one of his past 3D CAD webinars or browse our 3D CAD on-demand webinar library.