Based on some renderings and concept drawings, Rob Ida and his team have taken it upon themselves to fill in the gaps of information missing from Tucker’s design. They’re fitting the car with an engine that they thought maybe Preston Tucker would have used. They believe Tucker would have used the Franklin Air-Cooled, four-cylinder engine because he owned the Franklin Air-Cooled Engine Company at the time. 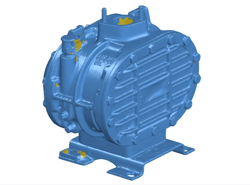 By having three-dimensional scans of the engine finished, they’re able to take that information to work the engine into the automobile. They can make it fit in the body and possibly put superchargers on. These are all things that Tucker was thinking to use, and they’re now able to use real engineering to build the car.

Something very interesting about this project is that Sean Tucker is helping the team. Sean

is Preston Tucker’s great-grandson, and he is using both his family history and engineering background to bring the Tucker Carioca to life. Sean says, “My role in the project is I bring some of the historical perspectives from the family and gather the different pieces of history that are maybe a little less well-known that we have easier access to them than others as a result of being in the family.” Sean works as a mechanical engineer with an emphasis on industrial design work—something that will be beneficial to the project.

Before using the Artec scanners, the team used to measure and model with CAD. By having the information from SOLIDWORKS available, it opens doors for them to go to the

next level. It would take thousands of hours to do everything this project needs in a manual sense. By using the Artec Eva, a structured light 3D scanner, they can quickly capture texture and measurements at a high resolution. The Artec Eva is used to scan medium-sized objects, while the Artec Space Spider captures objects of smaller size. The Space Spider captures small objects with high precision based on blue light technology. This new generation metrological device is equipped with automatic temperature stabilization for high-precision scans. It makes scanning smaller objects highly practical.

Both scanners are very easy to use. Just plug in the scanner and point it around the object as you would with a video camera. You no longer need to apply targets to your object, and the scans automatically align. They’re now able to do the work necessary in only a few hours—saving them a lot of work in the long run.

Mike Souders scanned the Franklin Airplane engine with the Artec 3D scanner, and he was able to capture textured details as well as geometry. The speed and accuracy of these scans allow the team to begin working on the packaging of the engine inside of the tight body space. And then, more importantly, these scans help them understand how they’re going to cool that engine based upon the body design that they’re working with.

“When I think of how much time today saved us in terms of if we had to go and measure and draw every component, every piece of this thing, we're talking savings of thousands of hours. And so, it was a great day, very excited to see that information now feed into the next chapter of bringing this Tucker Carioca to life.”—Rob Ida

Now that you know how to use 3D scanners for reverse engineering and saw the amazing things that can be done, we invite you to click on the button below to learn more about this topic.