New In SOLIDWORKS 2016: Switch Back To The Classic Icon Colors

SOLIDWORKS is going vintage with a familiar look. A brand new option in SOLIDWORKS 2016 lets users revert to the old icon colors.

Now available with Service Pack (SP) 3.0, SOLIDWORKS 2016 brings back the classic look and feel of past releases with the new icon color option found in your system options.

These changes come just a few months after the initial release of SOLIDWORKS 2016 and its revamped interface. This was the first significant change to the interface in many years – and it was not universally well-received.

With the new icon color option in SP3, you will have the freedom to keep the default 2016 blue and gray icons or switch back to the classic green and yellow icons – the retro colors that first made SOLIDWORKS such a pleasure to use.

Why Was The Interfaced Changed In The First Place?

According to SOLIDWORKS, the main reasons for the interface change were to modernize a decade-old interface and also to incorporate scalable graphics that could accommodate newer, high-resolution monitors. No one likes having an application window maximized on their 4K or even 5K monitor just to have the icons look grainy and pixelated.

This has been a contentious issue with so much passionate feedback. The community asked for – nay, they demanded – the option for a classic color scheme that was easier to look at and comprehend.

Even Tom Spine, Manager of User Experience at SOLIDWORKS, took to the forums to reassure the SOLIDWORKS community that they were diligently working on implementing a solution. 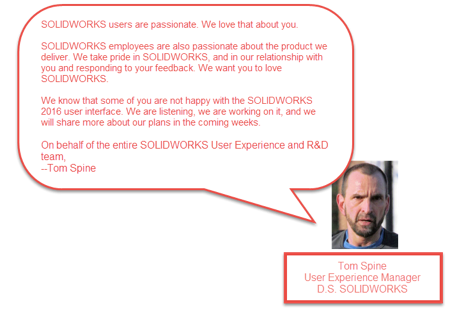 When Will The Classic Icon Option Be Available To Me?

As of today, SOLIDWORKS 2016 SP3 Early Visibility (EV) is available.

There is no official release date for the General Release of the third service pack at this time. However, the EV release is available to all of our SOLIDWORKS clients.

With that being said, we recommend that clients hold off until the production release. When it comes to the color scheme of these icons, nothing beats a classic. 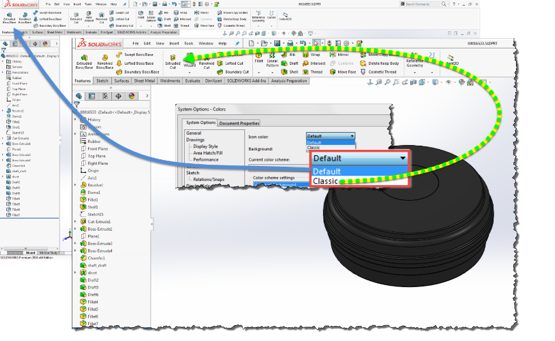 Not to worry. SOLIDWORKS responded to users' feedback and changes have been made to the SOLIDWORKS 2017 Classic User Interface. In fact, SOLIDWORKS enhanced several features in the recent release. Download our SOLIDWORKS 2017 Top 11 Features infographic to see our engineer's favorite updates.