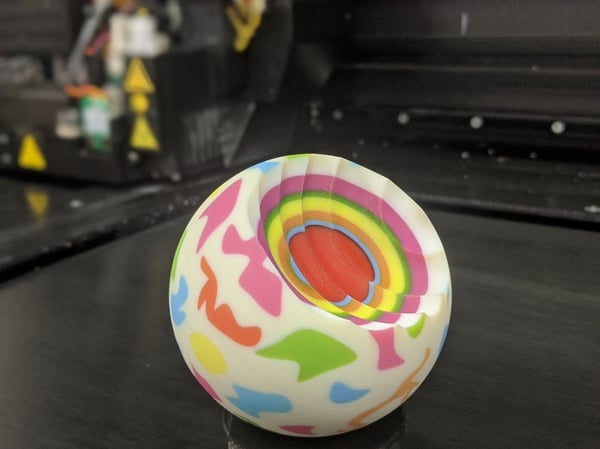 What is the Part Priority Feature?

Part Priority is a fascinating feature in GrabCAD Print that exists within the Advanced Slicer tool that comes into play when you have an assembly or multi-body part on your build tray. It allows you to essentially get a bit looser with your modeling skills, or in some scenarios, create fascinating artwork by allowing you to have bodies or parts that intersect and overlap one another. To achieve this, set the priority of each body so that the lower number item is printed intact and the higher number item is printed with the intersecting portion of that body removed from it.

One great way to think about this is to picture a Venn Diagram, as shown in example one. Imagine having two overlapping areas of two different colors. What do you think the software should allow the printer to do? The most common answer is that it would allow the printer to blend both materials together in that region. In the past, PolyJet software was supposed to work like this, it was often quite buggy and unfortunately didn’t work like this most of the time. 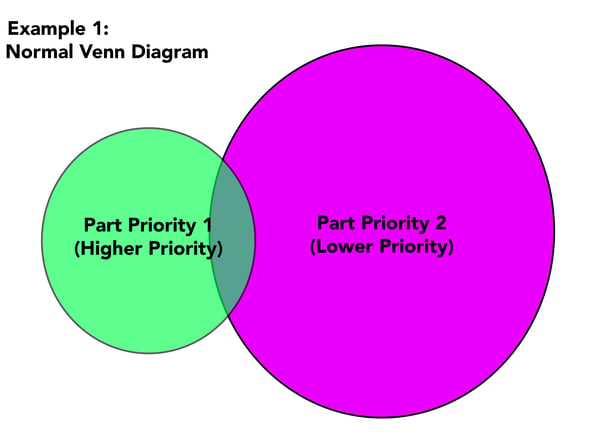 Now, look at example two. What older PolyJet software would actually do when it saw this interaction was assign a color or material selection to both bodies based on what the larger of the two bodies was assigned, which is very rarely the desired interaction in this scenario. 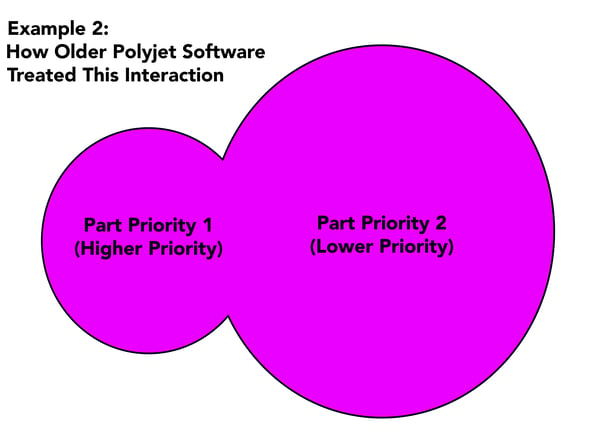 What the Part Priority feature in GrabCAD Print allows you to do is to print the higher priority body entirely in the color or material you are looking for, and the secondary body will print in its assigned color or material, minus the intersecting region it shares with part one, as shown in example three. 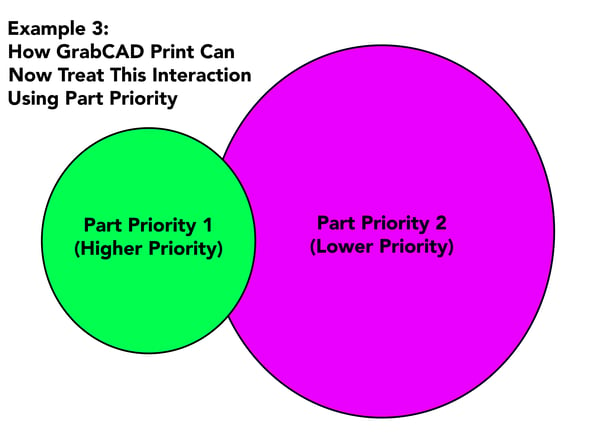 How to Use Part Priority in GrabCAD

To demonstrate the use of this feature, I will walk you through how to model a jawbreaker with seven intersecting bodies for core color and a 2mm thick outer shell with a colorful dinosaur egg pattern.

When you assign all your colors, you can then hit the Assemble button in the part selection panel. This will give you a visual of every one of those seven colors fighting to be seen in the intersecting region. 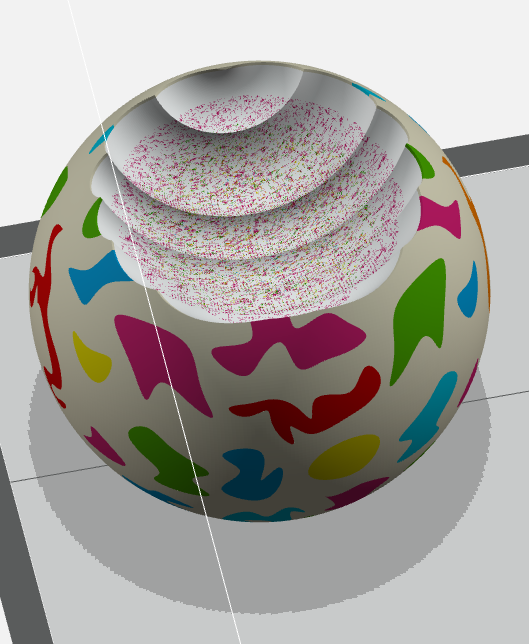 So, how is this corrected so that we see each body nested inside one another?

Once you open the model settings tab, right-click on each body that you care about, hover over the Part Priority option at the bottom of the list of commands, and then assign the value that is correct based on which bodies are intersecting with it. In our example here, the smallest sphere is red, so we will assign that with a priority of 1. Then, the light blue sphere gets the priority 2, the orange sphere with 3 and continue until we no longer care about priority. Since we have seven spheres, a single 2mm thick shell layer that doesn’t intersect and roughly 50 additional bodies that don’t intersect, all we need to worry about is assigning priority for spheres 1 through 6. The outer-most white layer (sphere 7) will automatically have a lower priority than the inner ones, so we don't have to worry about that sphere either. Finally, we have no intersection conflicts with the skin of the dinosaur egg pattern, so our model is ready to print! 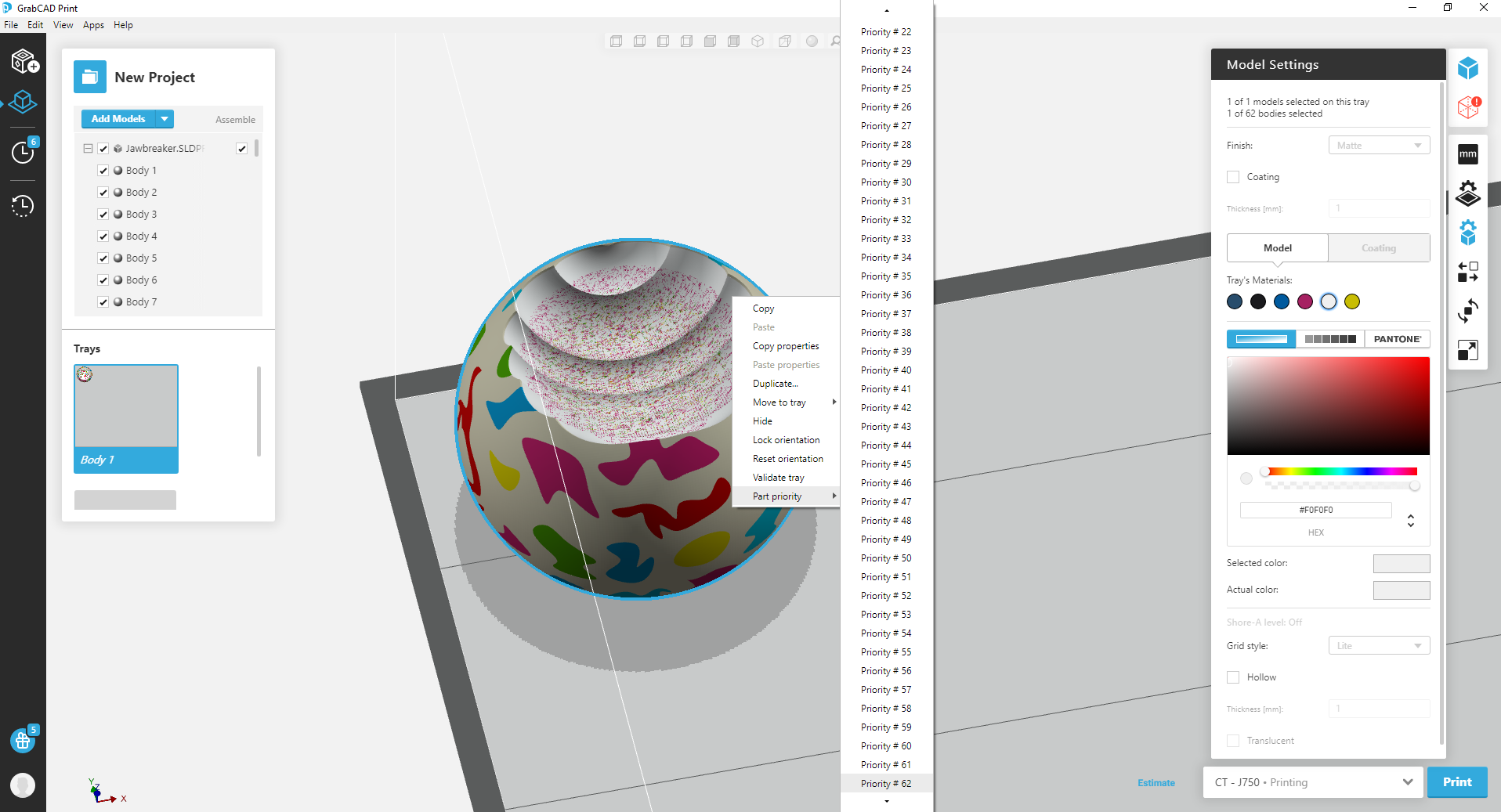 It’s been my goal over the past year to share all the incredible advancements that Stratasys's most technologically advanced 3D printers can do. Some of these features and capabilities are more useful than others, but I’m a firm believer that it always helps to know everything that your machinery can do. This helps you to think outside of the box of normal manufacturing techniques and enable you to create some truly incredible things!

Did you know that there are 3D printed solutions for the dental industry? You know, in case someone breaks a tooth when eating a jawbreaker. Check them out below.