Important Changes to the Stratasys Line of PolyJet 3D Printers

As the industry leader in 3D printing, Stratasys is always innovating to meet the current and future demands of the additive manufacturing industry. Sometimes this can lead to so many new product announcements in such a short time that it can be hard to keep track of all the changes, even when those changes are for the better. In this article, we are going to quickly summarize the most recent Stratasys updates, specifically with regards to their growing capabilities with PolyJet technology.

The Stratasys J850 Pro: Engineering applications demand a system with the flexibility to help you verify form, perform functional tests and validate design choices. The J850 Pro provides the functional, multi-material capabilities you need but without the color options found in the rest of the J8 Prime series. This entry into the J8 line-up keeps the large build-size and special materials found in the J850 Prime, but thanks to the absence of full-color printing options, comes in at a lower price-point.

The new J8 Series lineup: With all of the additions to the PolyJet lineup in the past year, Stratasys has recognized the need for mixed-material 3D printing, both from a design standpoint and an engineering standpoint. Where the J8 series has made a name for itself with the level of realism it can produce, there may not always be the need for that level of color when functional prototyping is involved. With that in mind they have a released a more "engineering-focused" printer with the J850 Pro (above) and have made the following name changes to the rest of the J8 line of printers to help customers understand the capabilities of each version of printer at a glance.

Here is a quick rundown of the changes to the lineup:

The Stratasys J55: This affordable solution brings ideas to life right from your office or studio environment. The PANTONE-validated machine is the first 3D printer to use a rotational sequence that allows you to produce high-quality parts at more speed, reducing your design cycle and time to market. The J55 produces the same accurate parts as other members in its family and has a smaller footprint. Create unlimited patterns and textures with this new machine. 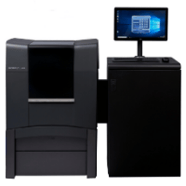 The Stratasys J826 (Prime): This new addition is an entry-level PolyJet 3D printer that brings multi-material and full-color in a single print to the enterprise design world. With the J826, designers will have the capability of combining rigid to flexible materials and print different textures without having to manually replace materials. Ultra-realistic simulation is now more accessible and affordable.

Objet30 Product Update: Stratasys rolled out multiple updates to their popular Objet30 3D printer series which is known for providing the power of PolyJet technology in a desktop-sized system. These updates to existing units include exciting new materials options and a significantly faster workflow.

You can also get all these improvements and a fresh look in a new machine with their latest generation: the Objet30 Prime (V5).

GrabCAD Print Integration with KeyShot: Stratasys announced their partnership with KeyShot rendering software. The integration between GrabCAD Print and KeyShot 10 (and later) will allow users to use the same 3D model for rendering and printing through the seamless export of 3MF files; saving time and money. This type of workflow has been requested by avid users of Additive Manufacturing for a while and Stratasys has delivered this year!

If you want to review all the product updates and launches from the past couple of years as well as see any specials discounts or promotions currently being offered for these amazing machines, check our "News & Promotions" section: