How 3D Printing is Transforming the Aerospace Industry

Since the Wright brothers first launched their wood and canvas glider in the early 1900s, technology has improved dramatically, making international travel and space exploration a reality. Additive manufacturing, better known as 3D printing, is playing a major role in this revolution by reducing weight, strengthening materials and streamlining design in the aerospace industry.

The aerospace industry includes a range of commercial, industrial and military applications, and is comprised of departments that design, manufacture, operate and maintain the aircraft or spacecraft. Among the first advocates of 3D printing, the airline industry is a driving force in the evolution of this technology for both manufacturing end-use parts and prototyping. Airlines depend on 3D printing to alleviate supply chain constraints, limit warehouse space and reduce wasted materials from traditional manufacturing processes. Rapidly producing aircraft parts on demand saves enormous amounts of space, time and money.

In fact, minimizing weight is the number one way that aerospace manufacturing companies save money because weight affects an aircraft’s payload, fuel consumption, emissions, speed and even safety. Unlike traditional manufacturing processes, such as CNC where material is removed to create a part, Stratasys FDM (Fused Deposition Modeling) 3D printers create parts from the base up, layer-by-layer, allowing complex geometries and streamlined designs with less overall components. This all translates to reduced weight in the air. Since you are adding material rather than removing material, this process also drastically reduces waste during manufacturing. Air ducts, wall panels, seat frameworks and even engine components have all benefited from reduced weight enabled by 3D printing. 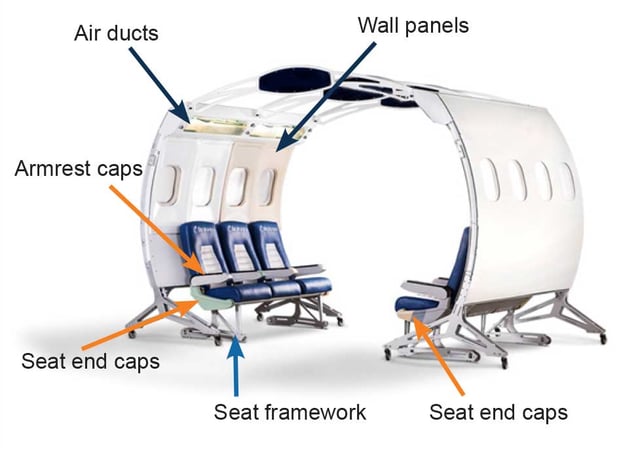 According to Apex, one of the aviation industry’s top leaders, Airbus, now has a record number of 3D printed parts on their new A350 XWB aircraft, with 1,000+ parts. Partnering with Stratasys helped them produce these parts quickly and efficiently using high-performance FDM materials like ULTEM 9085. This production-grade thermoplastic is a strong and FST (flame smoke and toxicity) compliant material with excellent strength-to-weight ratio, certified to Airbus’s specifications. 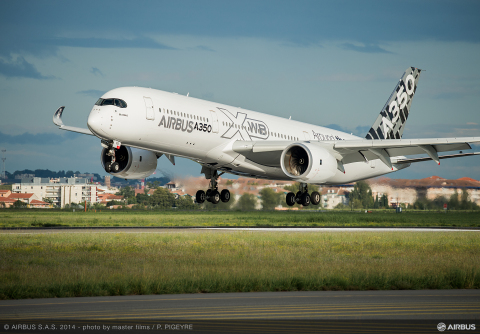 Similarly, an article by Robert Dehue also explains that NASA is using a Stratasys 3D printer to develop and test a space rover. The rover is about the size of a Hummer with a pressurized cabin to support life on Mars and currently contains over 70 FDM 3D printed parts. The 3D printed parts on NASA’s rover include flame-retardant vents and housings, camera mounts, pod doors, a large part that functions as a front bumper and many other customized fixtures.

FDM printing offers complex parts with quick turnaround time, which has helped the RATS team build customized housings for complex electronic assemblies that are needed to accomplish their goals. With an estimate of $10,000 per pound of material sent to space, it is no wonder why NASA leaned toward 3D printing. 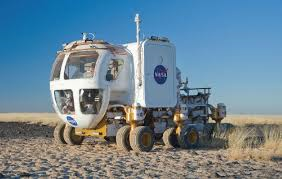 “You always want it to be as light as possible, but you also want it to be strong enough that it’s got your safety factors, that nobody’s going to get hurt.” - NASA test engineer, Chris Chapman

In addition to the rover, Stratasys 3D printing also helps solve complex problems on the International Space Station (ISS).  For example, the University of Alabama Birmingham (UAB) Center for Biophysical Sciences & Engineering (CBSE) develops low temperature freezers down to -256 degrees Fahrenheit to facilitate the transportation and processing of experiments to the ISS in accordance with NASA. When CBSE needed a new way to construct an interior liner for their freezer that was space and weight conscious, they turned to Stratasys 3D printing and the highly durable material, ULTEM 9085.

ULTEM materials are particularly popular among the aerospace industry because of their resistance to heat and chemicals with a heat deflection temperature around 153 DegreesCelsius (307 Fahrenheit). Using ULTEM in an extremely cold environment is uncommon, but after thorough testing under harsh temperatures and the simulated stresses involved in launching a rocket, ULTEM performed as they hoped. In the end, the team produced a compact inner shell for their freezer units that contained all the mounting structures necessary for mounting in a one-part build.  The first freezer units reached the International Space Station in February, 2015 aboard the Falcon 9 SpaceX CRS-5. 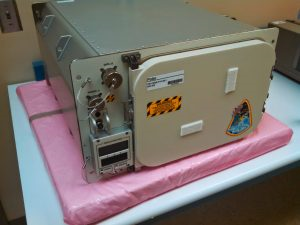 Ultem 9085 had also been an invaluable choice for use on satellites. According to NASA, their  Jet Propulsion Laboratory found 3D printing to be a much cheaper and quicker alternative to machining custom antenna arrays out of astroquartz, which is a time consuming and very expensive process usually reserved only for larger satellites. The COSMIC-2 (Constellation Observing System for Meteorology, Ionosphere, and Climate) is a medium-sized satellite with 30 antennas used to capture a revolutionary amount of data from GPS and GLONASS that will benefit weather prediction models and research for years to come.

NASA chose Stratasys Ultem 9085 to create the 30 antenna arrays that were vital to the success of this project. After rigorous testing for UV radiation, atomic oxygen, outgassing and vibration, they found that ULTEM qualified to be used on the exterior of an aircraft in space, especially when coated in their S13G solar radiation protective paint. After thorough design revisions and confirmation, Stratasys Direct Manufacturing completed the antenna mounts to NASA’s rigorous standards.

“Not only did NASA JPL save time and money by producing these antenna arrays with FDM, they validated the technology and material for the exterior of a spacecraft, paving the way for future flight projects” -Joel Smith, Strategic Account Manager for Aerospace and Defense at Stratasys Direct. 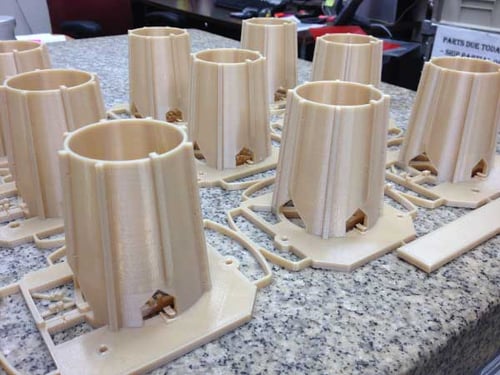 Source: Stratasys, Builds the Printed Parts to Function on the Exterior of a Satellite

The Future of 3D Printing in Aerospace

NASA and Airbus are just a few examples of how major organizations are turning to 3D printing to solve complex engineering problems and create specialized parts. But what is next on the horizon for 3D printing in aerospace? We’re glad you asked.

As metal 3D printing advances, we predict vital components of both domestic aircrafts and spaceships will adopt additive manufacturing methods using custom alloys and high-end lightweight thermoplastics. Companies like Boeing are already investing in metal 3D printing companies, like Desktop Metal with the hopes of utilizing these new technologies for research and development as well as end-use-parts for aircraft. With expanding capabilities, 3D printing will be an even more practical solution for aerospace manufacturing.

As if 3D printing on the ground isn’t high tech enough, additive technologies are also being tested in space. NASA even foresees future spacecrafts coming equipped with 3D printers, so scientists can send astronauts digital CADD files to be printed. The ability to create unforeseen tools on a space mission is game changing.

Want to learn more about additive trends in aerospace? Download our whitepaper by clicking the image below.