There are less than 3,000 Certified SOLIDWORKS Experts (CSWEs) in the world, and one of them is a high school student. Two weeks ago, Tim Ackaway, student at Braden River High School, passed the CSWE, and this is his journey. 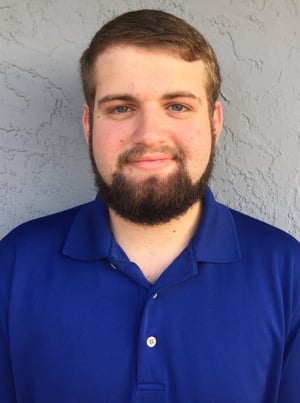 According to a letter Tim wrote to SOLIDWORKS Certification Manager, Mike Puckett, he first found his love for the software when his sixth grade teacher introduced the basics of SOLIDWORKS in a class project.

Tim said, "From that day on, I knew that I wanted to continue using SOLIDWORKS."

Before he knew it, he was learning how to build components, assemble parts and design ideas from scratch without any assistance from tutorials. Like any new user, Tim ran into some bumps on his first do-it-himself design—an iPhone. But with some time, he started to get the hang of creating shapes and adding details.

By eighth grade, Tim got word that SOLIDWORKS has certifications that students could take, and he started challenging himself with practice tests. When his teacher finally gave him the test, he passed.

"I passed, missing only one question on the entire test." He said. "I was ecstatic when I saw my results pop up on the screen! My hard work from the last three years had finally paid off."

Passing the SOLIDWORKS academic certification was just the beginning. Tim also faced several challenges in his six year pursuit of the CSWE. In fact, soon after he admits to failing a SOLIDWORKS project his high school engineering teacher gave him.

"From there, I was determined to get better at SOLIDWORKS. I watched a variety of YouTube videos about random features in the program."

Tim used his failures as motivation to learn and challenge himself even more. He continued working hard and set his eyes on his next goal—becoming a Certified SOLIDWORKS Professional (CSWP). No freshman at his high school ever passed this exam, but that didn't stop Tim from taking practice tests online and passing the first of three CSWP exams with a perfect score.

The second segment posed more of a challenge as Tim failed his first attempt by only one question. After waiting to retest, he failed for a second time, growing more discouraged. But failing didn't stop Tim from pushing himself over the next hurdle and passing on his third attempt.

"My resilience paid off, this time I passed, I had finally conquered part two of this test. The last remaining part was the assemblies, something which I felt very confident in doing. I took that one about a week later and passed with a perfect score."

Tim didn't want to stop at his CSWP certification. By his junior year of high school, he continued on to pass his CSWPA-DT, CSWPA-SM and CSWPA-MT. And as if those SOLIDWORKS certifications weren't impressive enough for a teenager, Tim set an even bigger goal.

Tim said, "The CSWE for me is a goal that I’ve been trying to achieve since I’ve heard about it. The CSWE would showcase the hard work that I’ve been putting in for the last 6 years. I highly encourage anyone to work toward the CSWE, as there is a lot to be learned through the exams, and that knowledge can help with many of the projects that are done in SOLIDWORKS."

We are proud to share that this month, Tim Ackaway passed his CSWE. Way to go, Tim!

Find out how to get SOLIDWORKS certified by downloading our infographic.