SOLIDWORKS Motion Simulation tools are, to a surprising degree, under-implemented and I’m on a mission to change that. In our last installment, we explained why the use of Sketches is a sound foundation for starting a machine design project, and why the use of Sketch Blocks helps bring structure, best performance, and especially motion to your sketch.

In this article, we explore blocks in a bit more detail. We will cover some special sketch relations that apply only to blocks specifically to allow you to capture common motion elements of machine design.

Blocks That Do Not Slide On Each Other

With the basic list of sketch relations, we can only represent certain very fundamental machine joints. The coincident and concentric relations are, of course, good for pivoting linkages and hinges. The collinear relation is good for parts that slide on each other. These relations are effectively frictionless. But what about parts that should engage and ‘stick’ because of friction or meshed teeth?

If the two bodies are created as blocks, then there are special relations to model rolling contact; the engage blocks relation and the traction relation. Watch the video below for a quick demonstration of these two relations.

An important limitation of the approach used by regular sketch relations and the engage blocks relation is that they only allow two selected objects to be related, but some rolling/sliding contact occurs with multi-line contours, such as a cam profile. Before applying ‘engage blocks’ to a cam outline, like the red teardrop shape below, we have to group the sequence of line segments together using the Make Path command. 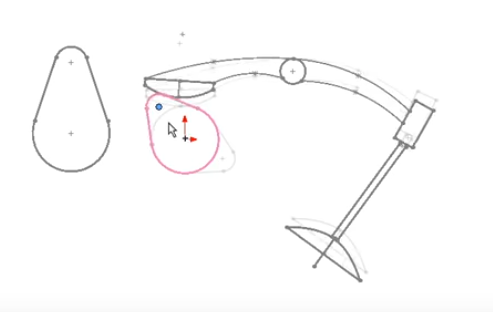 The Make Path command allows the lines to be chained together as a pre-grouped entity. The Path feature will then hand off any rolling contact smoothly from one line segment to the next. Watch the video below to see an excellent, detailed example from the O’Reilly Media training website.

As noted above, the Make Path command does not necessarily require us to create a block before defining a path. However, if we do not block the lines of a cam together, it is incumbent upon us to completely size and shape all those lines (while still leaving the figure free to pivot) so that it does not ‘fall apart’ while animating. For my sanity, I will always build the block first and trace the Path over that.

A belt drive is another kind of rolling contact but the pulleys or sprockets do not touch. We can simulate this motion transmission (without having to build a model) with a virtual belt using the belt/chain sketch relation. 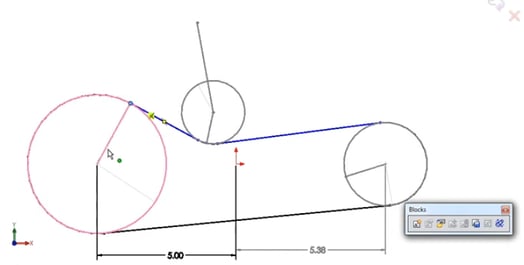 Watch the video below to see a succinct example that demonstrates this sketch relation.

Building a Foundation in 2D

A lot of the 2D relationships we find in SOLIDWORKS are mirrored in 3D. The value of this ”flat” approach to machine design within a single sketch can be seen in a few different ways:


If we have a machine with a lot of motion paths and they are independent of one another, we may make an entire sketch that is dedicated to serving as the skeleton (ground). Here, I can keep all other motion elements in their own sketches - one sketch for each animation load-path.

If the design reaches a stage where several other designers are needed to collaborate on the design, we will want to migrate our work from a single part into an assembly. But we needn’t lose any work done within the part. We can add our part to an assembly as a special feature called an envelope part. Envelope parts add no mass and do not appear in the bill of materials. Their sketches and bodies are available as scaffolding on which we can mate motion elements and trace them over to design guards and housings, so the ‘skeleton sketch' now becomes a ‘skeleton part’.

Quick note for all you Industrial Designers: I am NOT talking about how you can split one concept model into the family-of-parts bodies that make up the product. SOLIDWORKS doesn’t call that a skeleton part, they call that “top-down design” via a multi-body “master model”.

I mentioned above that a machine might have several animation load-paths, and so each motion could be blocks animating in their own sketch. That is one way we can take our machine design into the third dimension.

However, if the Sketch1 is ‘ground’, and Sketch2 is all actuations on the X-Y plane and Sketch3 is all animations on the Y-Z plane, etc., this can create a timing issue. More specifically; the sketch order. This is because our Sketch3 can certainly have relations to connect to (and animate with) Sketch2 and Sketch1. The timing problems come into play because there is no way to make some block in Sketch1 update position when something moves in Sketch3, because Sketch3, technically, hasn't happened yet. Or, is there a way? Can we do machine design in a single part file and see all sketch planes updating simultaneously?

In fact, there IS a way to do this! In the next article in this series, I will explore the 3D sketch and show you how we can combine several 2D sketches together in an order-independent way and connect them with 3D linkages, so that you get the speed, convenience and compartmentation afforded by blocks – and still have simultaneous motion updates in 3D.

Sorry for leaving you on a cliff-hanger, but it’s too big a topic to talk about here, and I didn’t want to end this article without at least letting you know that there was a path and process for getting all these 2D sketches into an interconnected 3D space. So, stay tuned, I’ll get you into the third dimension soon!

TriMech’s Project Engineering Group helps businesses solve their trickiest problems, whether it is in Design, Scanning, Reverse-Engineering, Finite-Element Analysis, Rigid-Body Dynamics or Fluid Dynamics. Learn more about what we can do.