End-of-Arm Tooling: Making the Right Tool for the Job

Robotic automation, frequently in the form of robotic arms, is used across multiple industries to automate tasks that require precision and call for high repeatability. End-of-Arm Tooling (EOAT) is one of the main components of robotic technology and typically refers to the device attached at the end of a robotic arm. In many cases, these robotic arms are used continuously for long periods and eventually need to be replaced, halting production, and becoming a financial burden. Traditional methods used to replace these parts, similar to CNC, can take up to 24 hours to produce a new part and do not guarantee the part will fit in the EOAT. Thankfully, 3D printing brings a solution to minimize downtime and ensure the replacement part will fit perfectly the first time. Let's look at some examples of how different companies in multiple industries have taken advantage of 3D printing to quickly fix their EOAT. 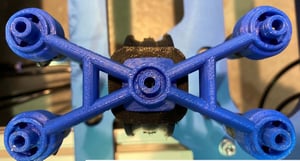 Established in 2001, this UK-based company specializes in robotics for pick and place machines and are essential to the food packaging industry. This industry runs 24/7 and so does its machinery, leaving it vulnerable to costly downtime if machine issues arise. To combat this issue, Form Automation Ltd relies on 3D printing with the Stratasys F370 to quickly and cost-effectively produce replacement parts for the various robots. Instead of using aluminum they use TPU 92A, a Stratasys material which is an elastomer that is 50% lighter and results in better machine performance.

“Replacing an aluminum part would have incurred significant delays to the production line. Thankfully, with the F370, I can now have a new tool within just a few hours. Coupled with that, the cost to produce 3D printed end-of-arm tools is less than that of producing the same parts in aluminum.” 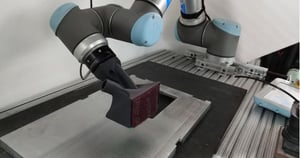 Based out of Dallas, Texas, this machine shop is a leader in turnkey custom robotic solutions. They specialize in streamlining a company's manufacturing operations with the help of robotic arms and even custom end-effectors. They also create these parts for CNC machining, brake press machine tending and automated part sanding.

All Axis Robotics utilizes the MakerBot METHOD X to create these custom tooling options and only 10 minutes of labor time. This is a drastic improvement from the typical 24 hours of CNC machining. Instead of using traditional aluminum, they produce their custom parts using the Stratasys ABS and SR-30, an industry-grade soluble release support material that is dissolved through combining heated water and an additional solvent agent that won’t damage the ABS plastic. 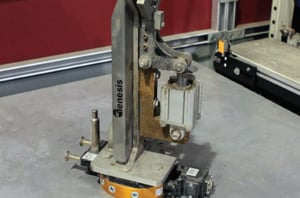 The Genesis Systems Group designs, builds and implements robotic arm automation systems. One specialty is building a robotic waterjet cutting system that can be used to trim composite parts. Originally, the approach to trim the complex parts was to use a robotic arm to move the cutter around the part, which is potentially dangerous for employees. Genesis developed a safer process in which the EOAT gripped the part and moved it around the cutter to trim the part. The even bigger challenge was that this meant the company needed a custom gripper for each part to be trimmed.

With traditional CNC machining to create the grippers, this would have taken a lot of time and money. Fortunately, they were able to use FDM technology to 3D print each gripper which reduced production time by 84% and costs by 95%.

Ready to learn all the details on how each one of these companies utilized EOAT and 3D printing to reduce time and costs? Check out our combined case studies.