We're at the end of Phase I in the TriMech Drone Wars. Our four teams have been keeping us up-to-date on their latest activities and strategies. If you missed our kick-off blog, you can find it here.

To quickly refresh your memory, each team was provided an off-the-shelf drone that they will modify using 3D printed parts. Modification expenses are capped at $250.00. The drones will compete against each other in a speed race, a precision flight, and a payload test.

In this post, we'll review the outcomes of these teams' modifications for Phase I! 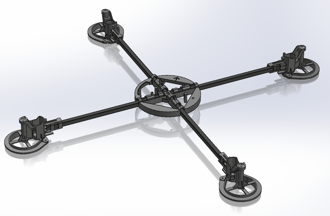 Once Team Cyclone had accurately measured and modeled the geometry of their drone, they knew they needed to capture the weight and center of mass. This was a challenge for the team as many of the components in the drone are either plastic or composite fiber with unknown metrics. Guessing the weights was not an approach Team Cyclone wanted to take.

How did they troubleshoot this challenge? They employed SOLIDWORKS to manually assign mass to the modeled components. For original equipment manufacturer (OEM) components like motors, the team contacted the OEM vendors for specifications. This enabled Team Cyclone to get the overall weight and center of mass for their drone. The initial drone design has been virtualized! 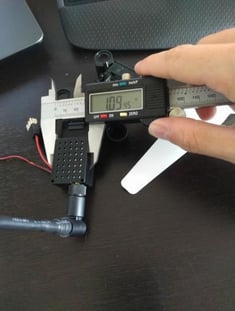 Team Cyclone wasn't the only team determined to get accurate measurements. Game of Drones was also challenged in their efforts to obtain accurate measurements of the outer shell and drone propellers. To tackle those components, they brought in the big guns, 3D scanning guns that is!

Matrix CAD Design, Inc. stopped by the office to scan some drone components. First, they scanned the propeller. This allowed Game of Drones to drop the SOLIDWORKS model on top of the 3D scanned file to determine accuracy.

The body of the drone was scanned, converted into a solid body and imported into SOLIDWORKS. Once everything was modeled, Game of Drones started the redesign process. Increasing the power of their drone's motors and redesigning the propellers are their top two priorities.

Want to see how they did it? Check out the video below! Currently, there is a huge debate in the drone community about which is better: a 2-blade or 3-blade propeller. It’s time someone put that debate to rest. The team decided to do a simulation study on their accurate propeller blade model to determine which blade generates more lift. Game of Drones has promised to submit results for the SOLIDWORKS Flow Simulation study for next week's blog post as well as some of the modifications they chose to pursue to make their drone the king! 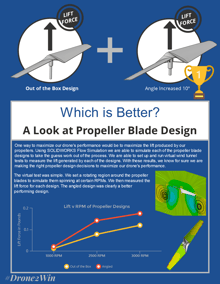 Drone 2 Win's plan of attack was to modify the blades of their propellers immediately. The team redesigned the propeller with a 10-degree angle in SOLIDWORKS to determine the impact of this modification. The results demonstrated that the angled design was clearly better.

As we saw in the last post, Batteries Not Included is sinking some serious time and effort into the design of their propeller. With a propeller sketched in SOLIDWORKS (see how they sketched it in the video below), the team ran an analysis with SOLIDWORKS Flow Simulation on a 2-blade propeller. With this they were able to evaluate thrust at an assumed rate of 2,000 RPM, which was also assumed in the other blade design iterations. Airflow patterns, speed, and thrust for a standard 2-blade propeller are reported in the image to the right. 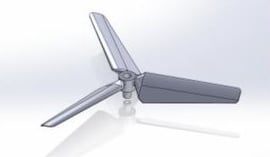 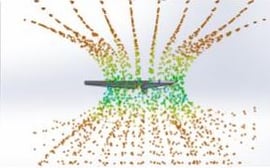 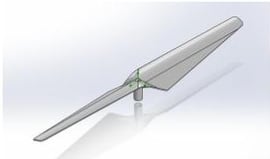 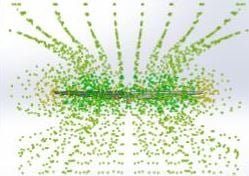 While the team deemed that the results of the blade design optimization tests are not conclusive, they have a great starting point and have a good sense of what will not work. This information will only "propel" them to new, better ideas for Phase II (sorry, we couldn't help ourselves).

Got any recommendations or ideas on how these teams should tackle their drone modifications in Phase II? Sound off in the comment section below or find us on social media! Use the following hashtags to target a specific team.

To see what happened in TriMech Drone Wars Week 2: Part One, click here!