The TriMech Drone Wars are in full swing. Our four teams have been keeping us up-to-date on their latest activities and strategies as they build their drones. We'll be updating you twice a week with blogs that take an in-depth look at each team's approach during every phase of this competition and follow up with the outcomes of their modification, any challenges they may have encountered, and what modifications are in the pipeline for the next phase.

If you missed our kick-off blog, you can find it here. As a recap, each team was provided an off-the-shelf drone that they will modify using 3D printed parts at a max of $250. They will pit the drones against each other in a speed race, a precision flight, and a payload test.

Without further ado, let's see the plans of attack that these guys launched in Phase I. 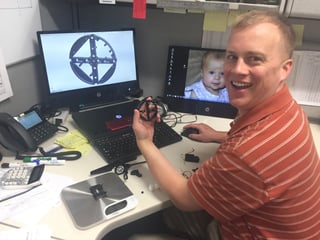 Team 1, hereafter known as "Team Cyclone", started off by producing a digital prototype of their drone's initial design to run "what-if" on the f scenarios to optimize performance, weight, and other important flight characteristics.

Modeling the geometry of the components was relatively quick and easy for Team Cyclone with the aid of digital calipers.

Because they’re dealing with an “aircraft", Team Cyclone knows that it’s important that they not only capture the geometry of the drone but also accurately capture its weight and center of mass. 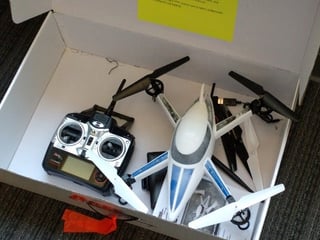 Team 2, Code Name: Game of Drones, is off to a quick start as well! After a successful unboxing of their Ares Ethos FPV quad drone, the team started planning the next steps to help improve the drone’s design to make it better, faster, and of course, stronger.

The disassembly of the drone was pretty tedious. If you are thinking of disassembling your Ares Ethos, Game of Drones' advice to you is to be sure you have a set of jeweler’s screwdrivers to make the job a bit easier.

Once the drone was broken down into individual pieces, they used calipers and 3D scanning to reverse engineer each component they thought would be necessary to change the design of their drone. 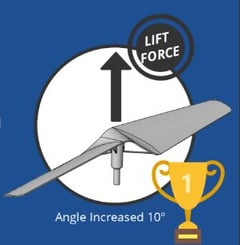 Drone 2 Win, formerly known as Team 3, had a very specific plan of action right out of the gate. They recognized that to increase their drone's performance, it was necessary to maximize the lift produced by their propellers.

SOLIDWORKS Flow Simulation enabled them to simulate each of the propeller blade designs to take the guesswork out of the modification process.

"It’s not taking place in a galaxy far, far away but rather in TriMech offices from Florida to Pennsylvania. As each team gets started, our team here known as Batteries Not Included is intent on winning this thing. Models are being generated, test flights are taking place, and ideas are being discussed to get the most out of the drone we’ve all been given." - Todd Troutt Like Drone 2 Win, Batteries Not Included has also taken a very direct strategy as they engage in Phase I. They believe the payload test is going to generate the most improvements to the stock drone, and thus the blade will need to be analyzed using SOLIDWORKS Flow Simulation. They have some interesting tests they will be running to determine whether a 2- or 3- blade propeller is a superior option to overcome the payload obstacle.

Got any recommendations or ideas on how these teams should tackle their drone modifications? Sound off in the comment section below or find us on social media! Use the following hashtags to target a specific team.