The TriMech Drone Wars are well underway as we explore the teams' creations in Phase II. Our four teams are keeping us up-to-date on their latest activities and strategies. If you missed our kick-off blog, you can find it here.

You all know the drill, but here's the recap anyway. Each team was provided an off-the-shelf drone that they will modify using 3D printed parts. Modification expenses are capped at $250.00. The drones will compete against each other in a speed race, a precision flight, and a payload test.

In this post, we'll review the outcomes of these teams' modifications for Phase II! 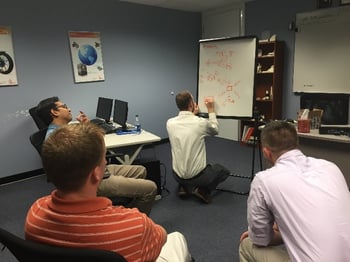 This week after an inspection of the existing design and evaluating its flight capabilities, Team Cyclone attempted to determine what approaches they'd take on the overall design.

Team Cyclone recognized that no matter what approach they took, the design modifications would be substantial. Since high torque motors are not cheap, the team opted to modify their drone to maximize speed.

To counteract the increased weight from a high-speed (kV) motor, Team Cyclone sought to decrease the weight through their modifications. Using fiberglass components for all key structural components would allow the team to improve the power-to-weight ratio of their motors, and thus the actual footprint of the drone was reduced. Fortunately, they were able to find prefabricated fiberglass parts for the drone, but this meant remodeling almost all key components of the drone in the SOLIDWORKS model.

The team has upped the pressure on themselves by demanding the design be functional AND aesthetically on-point. This might prove to be a challenge for Team Cyclone as their weight reduction goals limit them. In Part 2, we'll see how they utilized 3D printing to address these obstacles.

It’s time to find out the results of Game of Drones’ 2- vs. 3-blade propeller test to see which design would generate the most lift.

Game of Drones drew up an accurate model of the current 2-blade propeller and also designed a 3-blade propeller in SOLIDWORKS. After performing SOLIDWORKS Flow Simulation tests, the team observed that the 3-blade propeller generated almost 150% more lift even though it was slightly heavier. The increase in lift will require 64% more torque.

Are the stock motors for their quad powerful enough to satisfy the torque requirements of a 3-blade propeller?

Curious about Game of Drones' Flow Simulation process? Click here or check out the video below! In Phase I, Drone 2 Win hit the ground running on redesigning their propeller. They used SOLIDWORKS Surface and solid modeling techniques to design the propeller for Phase II digitally. The digital file was converted and sent to CatalystEX software to start the 3D printing process.

Batteries Not Included is not playing around in this competition. After analyzing all potential options, the team determined that desired modifications would require changing out every component on the drone. Instead, the team settled on a crazy idea. They are proposing to introduce a completely separate drone into the mix. They will be operating TWO drones.

“After using SOLIDWORKS Flow Simulation to test out some blade designs, our team went to work on some bold ideas to increase our drone performance. We figure the race is going to depend mostly on the pilot, especially since most of us are new at flying these things. It may not help to make some screaming machine that we can’t control. Kind of like putting a 16-year-old in the driver’s seat of a Sprint Cup race car. Therefore, we wanted to get more lift capability and maintain stability.” – Todd Troutt, Batteries Not Included team member

In the next post, we’ll see how they overcome the challenges of handling two drones simultaneously from the same transmitter, dealing with issues of lift, and testing new prototypes!

Got any recommendations or ideas on how these teams should tackle their drone modifications in Phase II? Sound off in the comment section below or find us on social media! Use the following hashtags to target a specific team.

Interested in learning more tips and tricks you can apply to your own designs? Subscribe to our weekly Video Tech Tips to have them delivered straight to your inbox.