Differences Between ABS and ASA

Stratasys offers a variety of thermoplastic materials, all of which are designed to make strong, durable parts. Traditionally, consumers tend to gravitate toward ABS because it is the most well-known of the thermoplastic materials Stratasys offers. However, there is a dark horse in the FDM material lineup that few people look into, and it could prove to be a better solution to your needs over ABS. That material is called ASA. Keep reading to see how the two materials compare.

Similar to ABS materials, ASA is also a production-grade thermoplastic known for its strong material properties. It too is used for range of applications to create concept models, functional prototypes, manufacturing tools and production parts. One noticeable difference between materials is that ASA comes in four more colors than ABS (10 colors total). In addition to Ivory, White, Black, Dark Grey, Blue and Red, ASA also is available in Light Grey, Green, Yellow and Orange. Both materials also run on the same systems being currently available on Fortus 380mc, 450mc, and 900mc as well as the Stratasys F123 Series.

Click here to enlarge the spec sheet below comparing ABS-M30 and ASA.

Stratasys recognizes ASA as "matching or exceeding the mechanical properties of ABS." Aside from the obvious layer thickness, elongation, strength and impact specs noted in the graph above, we wanted to test ASA's UV stability to see what impact this makes over time. To do this, we ran a test where we printed two identical bird houses 1) 3D printed with ABS and 2) 3D printed with ASA. After the houses were assembled, they were left outside for over a year to see how well the materials endured the harsh New England weather. The results were outstanding. The ASA material looks almost as good as it did when it originally came off the machine, whereas the ABS turned an unappealing shade of yellow. 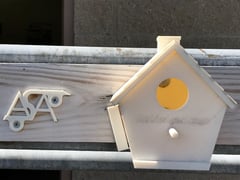 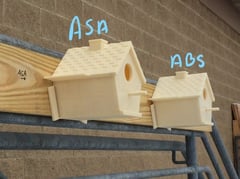 These results are due to ASA's combined mechanical strength with UV stability, making more aesthetically pleasing parts. These qualities also make outdoor commercial and infrastructure use among its top use cases. So if you're a user that typically only uses ABS material, you may want to take a strong look at 3D printing with ASA. Please feel free to reach out to TriMech to learn more about the ASA material and how it can be used to your advantage.

Still not sure which 3D printing material is best for the job? Download our guide to compare material properties.