SOLIDWORKS in Motion: Blocks in a 3D Sketch

SOLIDWORKS Motion Simulation tools are extremely powerful and often overlooked. In this series, we are working hard to help you see the value of using these tools. In our last installment, we learned that by using blocks we can make layout sketches for machine design that can contain sub-structures for faster performance, effective change control and motion.

Up to now, we have only considered sketching in a single plane. In this post, we will look at how a single 3D sketch can play host to any number of 2D sub-sketches. This gives you the power of 3D linkages whenever you need it and the ease of 2D control for the rest of your motion elements.

How Best To Constrain 3D Elements

Sketching in 3D is powerful, flexible, and solves useful problems. However, it is sometimes hard to control. For example, placing a point in any view and knowing for sure where that point’s altitude will be relative to that view plane. Another thing to consider is that in a 2D sketch after you’ve shaped and sized a figure, the position of that figure can only require three constraints: Horizontal location, vertical location, and rotation.

In the video clip below, I’ll introduce three tactics that allow you to take control of 3D sketching, even when creating linkages, that step off in all three directions.

Blocks in a 3D Sketch and Out-of-Plane Motion 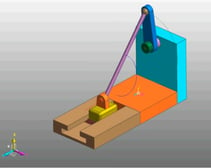 The real power of the 3D sketch is the ability to animate blocks simultaneously on multiple planes, without any parent/child order dependence issues. Watch the quick video I made showing how this 3D slider-crank can be mocked-up and animated, in a single part file. I like this example because the actual 3-D sketched element consists of only a single link.

This last example is a little more extensive. Pictured below is a Sarrus mechanism, (also attributed to Peaucellier), a historically interesting linkage that transmits linear motion to rotary (or visa-versa), with no sliding contacts, only pin friction. This sort of linkage was a big deal during the Age of Steam. 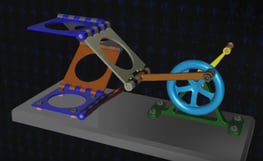 The top purple plate translates up and down. But it would collapse if not for the two hinge-plates that are at 90 degrees to the crank plane. Watch the quick video I made showing how to mock-up this linkage in wireframes and animate it in a 3D sketch.

So there you have it: machine design done in a single part file. Over the last few blog installments, we’ve seen that we can leverage sketch Blocks, in both 2D and 3D, to quickly and easily mock-up machine linkages all within a single file. And the best part is that everything we’ve done so far is available to everyone using just the base-level SOLIDWORKS CAD license. You will be glad to have practiced these skills when we get to discussing of top-down design in an assembly in a future article.

To recap, you can now apply what we’ve discussed to create a sketch-based machine design workflow in SOLIDWORKS to sell yourself on the fact that your machine will work. You can confirm (and show!) that the sizes, angles and travel limits are all good. More importantly, you now have a baseline tool to sell others on your design as well.

TriMech’s Project Engineering Group helps businesses solve their trickiest problems, whether it is in Design, Scanning, Reverse-Engineering, Finite-Element Analysis, Rigid-Body Dynamics or Fluid Dynamics. Learn more about what we can do.