Are you using your data efficiently? How do you keep the little things from falling through the cracks? SOLIDWORKS PDM is a tool that can help you stay on top of your data. Instead of wasting time searching for things, SOLIDWORKS PDM can make that data do the work for you. This article goes over the daily routine of two engineers - one with PDM Professional and one without.

Imagine two engineers at different companies. Let’s call them Diane and Larry. Diane and Larry both work at companies that focus on sheet metal fabrication. The main difference is that Diane’s company uses SOLIDWORKS PDM to manage their CAD files and all the other files that might be associated with this process. Larry’s company, on the other hand, uses regular Windows Explorer.

The day has come to start a new project. A regular client has reached out and says they want another set of parts similar to what they ordered last year, only slightly different.

Larry starts his project with a simple right-click to create a new folder. He consults his company’s naming convention memo, which states that all project folders need to include a project number, description, customer name and the initials of the person who created it. He then consults the spreadsheet that tells him what the next project number should be and then types out a name for the folder that is 25 characters long. He eyes it carefully to confirm he didn’t misspell anything.

Across town, Diane starts her project, also with a right-click, but chooses “New Project” from the right-click menu instead of a new folder. At this point, SOLIDWORKS PDM presents her with a quick form (called a template) to fill out the information about the project. 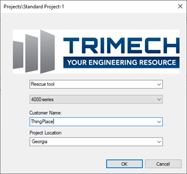 This template pulls the next project number available and Diane uses the drop-down menus to explain to PDM what the project is about. When Diane hits OK, PDM creates a new folder structure in the projects area of the vault. Not only did it create the folder structure, but it also created a project checklist that her company uses throughout the design process. Because Diane answered a few questions at the start of the project, she did not have to manually enter this information later in the checklist. PDM filled out several fields of the document for her.

Since this project is similar to another project, our engineers start looking for the previous project to modify.

Larry consults the Windows Explorer search. He cannot remember the name of the assembly, or where it is kept in his file system, but he thinks the part number contained “4240.” He starts the search at the root level of his projects folder. He hits the enter key and gets up to refill his coffee; he knows this could take a while. A few minutes later he returns and sees that Windows eventually found 3 copies of the file, all with the same name. He then spends the next several minutes opening files trying to figure out which is the correct one to use.

Diane, on the other hand, consults the PDM complete search tool. With the PDM search tool at her fingertips, she can search not only for the name of a file, but also things like who the customer was, custom properties within the assembly, or even information that exists in the data card of a file. The best part is that because PDM info is stored in a database, the search only takes a second, or two, instead of minutes.

Larry finally figures out which of the three assemblies is the one to use and opens it to perform a Pack and Go. He is greeted with a dialog box with the dreaded “Cannot find part XXX” message and gets frustrated because someone has been renaming or moving files and now the assembly reference links are broken. Once this is fixed, he launches Pack and Go. This creates a copy of the assembly and all files associated with it even though he only needs to modify a handful of parts. He understands making a fourth copy of this isn’t ideal, but he is in a hurry to get started and can deal with that later. He also knows any new parts means that he needs to consult another spreadsheet so he can see what the next part number to use is.

Diane uses SOLIDWORKS PDM’s Copy Tree which is similar to Pack and Go - only better. Diane chooses which files she needs to modify and instructs PDM to select new part numbers making sure to avoid any duplicate files. Copy Tree duplicates the files with the new names and places them into the new project folder. PDM is also constantly keeping track of references so she doesn’t need to worry about any broken references. 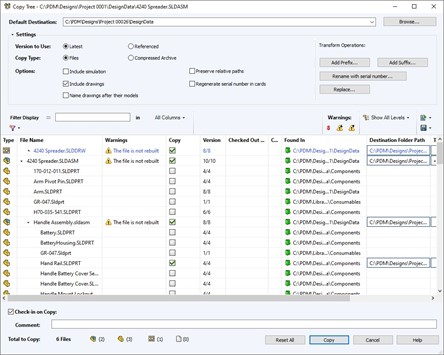 The Change and Approval process at Larry’s company could be improved upon. Sometimes changes are approved via email. In the past, it was a sheet of paper that always got lost, and sometimes it's just a conversation with the engineering manager. They often struggle with remembering exactly what changed, or what the changes needed to be since much of it is undocumented.

Diane’s company uses SOLIDWORKS PDM to control and document this process. Engineering change orders can be created from a right-click, similar to a new project. When it comes to approvals, Diane chooses “submit for approval” which automatically notifies the correct people that need to approve the design. 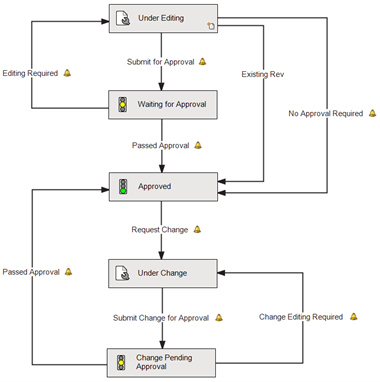 Now that the new project design has been approved, it is time for the manufacturing process. The laser operator at Larry’s company receives the work order to make 20 parts. The operator recognizes the design and remembers doing the job recently. He calls up the program and starts cutting new metal before any word has made it to him that the design has changed. Once this information gets to him, he needs to start over and scrap what he has done so far.

At Diane’s company, all drawings and programs are controlled by SOLIDWORKS PDM. As part of the approval process, all relevant manufacturing personnel is notified that this previous design has changed and new drawings exist. SOLIDWORKS PDM also automates the creation of these types of files such as the 2D flat pattern to be used at the laser. Diane’s company also has permissions set up so that manufacturing workers only have access to the latest versions of files.

>> Choosing Between PDM Standard and Professional: 5 Things You Need to Know

Do any of these scenarios sound familiar to you? If so, then SOLIDWORKS PDM Professional may be the right tool for you. Computers take on such a large part of any process in the modern engineering world, so why do so many people still rely on manual processes that can be prone to human error? This is just one of the tools that enable engineers to spend less time chasing loose ends, and instead, spend more time on being productive.

Watch the on-demand webinar below for more details on the difference between using Windows Explorer and SOLIDWORKS PDM to perform everyday engineering tasks. Review every step in the process from design to approvals and how much more difficult things are without this tool.

Want to know more about SOLIDWORKS PDM? Explore how it can streamline your company's data in this additional on-demand webinar!