A Closer Look at the Origin One 3D Printer

For the last 15 years Stratasys and their value-added resellers, like TriMech, had to field one reoccurring question that divided our 3D printing world into two clearly different segments. That question was, “Can I have the material performance of FDM, with the surface finish of PolyJet right out of the printer?" For so long, that answer was “no” unless you did some post-processing of the prints. Even looking into the history of Stratasys in the years before the Objet and Stratasys merger, you were mainly on one side or the other – strength or surface finish. However, this all changed with the advent of Programmable Photopolymerization (P3) technology, which is now found in the Stratasys Origin One 3D printer, and finally, we can say “yes”...

Rewinding back to the beginning of the year, Stratasys quietly acquired a company called Origin. Those who were aware of Origin knew there would be nothing quiet about this new joint venture. In fact, over the coming months, we have been eagerly waiting for the public announcement of how Origin’s technology would be injected into Stratasys’s product line so we could introduce it to our clients. In late April, the Stratasys Origin One was launched and with it, the promise of FDM part strength, UV resistance, impact resistance, FST ratings and long-term dimensional stability straight from a printer that produces parts with injection-molded surface finish and accuracy.

How does it work?

It's all in the process control. From the outside, this machine doesn’t look that much different than other VAT-based resin printers, but on the inside, the difference changes the landscape of 3D printing. The Stratasys Origin One’s proprietary Programmable Photopolymerization (P3) technology houses multiple sensors focused on its analysis of temperature, separation forces, and build plate pressure to ensure that builds are accurate, reliable and repeatable. 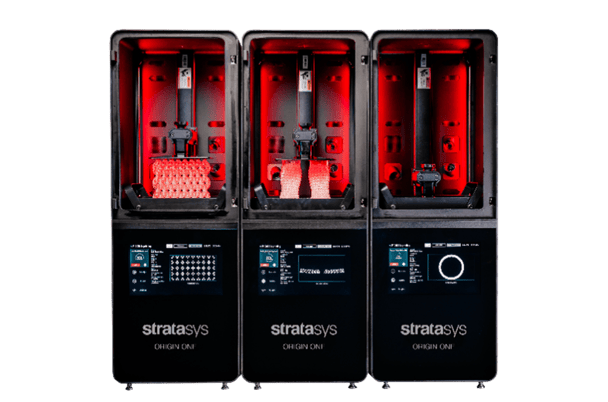 The heated build environment (up to 150C) allows for consistent resin viscosities and improves dimensional accuracy. The accurately controlled output of the high-resolution 4K light engine promotes impressive green-state part strength. While the actively monitored pressure and VAT separation processes ensure low forces during the building process to improve small part features, reduce warping and allow for a wider range of unsupported part geometries. These features make this a VAT-based machine that is nothing like the rest of the pack. 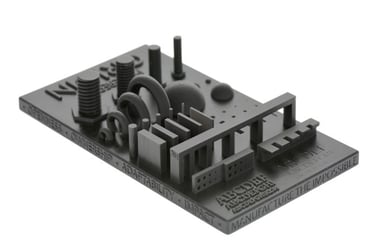 Is it really suited for production?

If there is one keyword that stands out for this machine from the manufacturers, it’s “Production”. This is a word that gets thrown around a lot these days in the additive manufacturing industry with loose definitions and often misleading statements. But not here. Production means the ability to produce hundreds of smaller end-use, high-quality, durable parts. These parts can be produced by the dozens within hours with very little post-processing required. The small footprint of the machine also lends itself to being used to create “print farms” to massively increase the daily throughput to rival molding processes in low to medium volume applications. There is even a resin available that allows for the production of injection mold tooling that is suited for hundreds of shots as well. 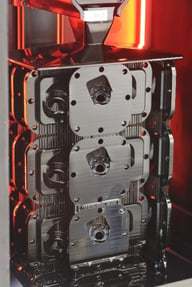 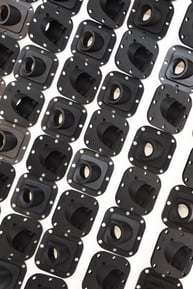 Above: This single build contains 40 camera housings that are end-use parts on the Origin One printer.

Are the parts really that strong?

“You say the parts are strong, but let's be honest, they are photopolymers….right?”
For most of us in the industry, the hardest part of the P3 technology for us to wrap our heads around is the extreme performance from thermoset plastics. I will try to break this down to something simple without too much science. Thermoset plastics, like the UV resins used in multiple 3D printers, are basically liquids that react with a catalyst (Ultra Violet light in this case) and get converted to a solid.

Think of a two-part epoxy: liquid A + liquid B equals a solid after a few minutes. With UV resins A & B are already mixed but a 3rd UV reactive component (called a photo inhibitor) is causing them to not fully mix. When the UV resin is exposed to Ultra Violet light, the photo inhibitor alters its chemical makeup and A and B fully mix and coverts to a solid. (Go easy on me chemistry buffs, I am taking some liberties here to make it easy to explain)

While thermoset plastics are used in a wide range of industries and offer some very impressive properties, the resins used in 3D printing are limited on the performance front. This is because 3D printing processes require resins that are relatively thin in viscosity and easily flow, spray, or spread out into thin films based on their respective printing process. Thicker viscosity resins generally can carry more polymers inside of them and yield better material performance. This is no different for Origin One except that the P3 process has a trick up its sleeve - heat.

Let's Turn Up the Heat

The ability to accurately heat and monitor the resin allows for the use of materials that have thick viscosities at room temperature yet become thinner and more workable when heated. This is taken to the extreme with some materials like Henkel/Loctite 3955 that are actually solid at room temperature and melt within the printer to become liquid before printing. Origin launches with ten resins with a range of unrivaled material properties like heat deflection temperatures in excess of 540F, notched IZOD impact of 70 J/m and tensile strengths over 90 MPa. These resins truly have what it takes to compete with thermoplastics like, Nylon, PC and even Ultem. 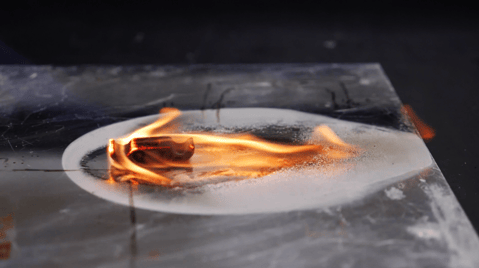 This is the point where you stop taking my word for it and start listening to others on what the Origin One P3 printer can offer. Below is a video where you can hear from Mark Savage, the Senior Manager of Additive Manufacturing for TE Connectivity (a producer of 190 billion products annually), tell the story of how the Stratasys Origin One has allowed their team to offer custom part runs without the need of resorting to injection molding.

As exciting as this new technology is for the industry, Stratasys also released a few more machines alongside the Origin One. Read our full overview of what is coming to market and some of the other technologies that will be impacting the additive manufacturing space.