What Makes the J850 Better?

First off, the J850 has some interesting mechanical upgrades to its internal systems, mainly focused on a larger material cabinet and liquid delivery system. Outside of these mechanical improvements, the most important upgrade is that the J850 now uses the left most head to print support resin and a model material, as opposed to both sets of nozzles printing just support material, as the J750 currently does when printing in High Quality or High Mix modes. This additional material channel is surprisingly important because it provides even more variety within our incredibly large range of material combinations and allows the system to be even more efficient.

As it stands with the J750, to be able to print in full-color we require five materials to be loaded into the machine:

As a result, because the J750 can only print six model materials at once, we only have one extra material channel which can be used for VeroClear or any of the Agilus materials, or a few other solo materials that don’t blend with other materials.

With seven material channels, we can now have full-rigid color loaded continuously, along with VeroClear and the Agilus material of our choice, all without having to swap anything in or out! The incredible utility that this brings will save you plenty of time and money, as the purging process involved with swapping between materials can be a time-consuming and expensive process if you need to do it often, depending on what materials are involved. 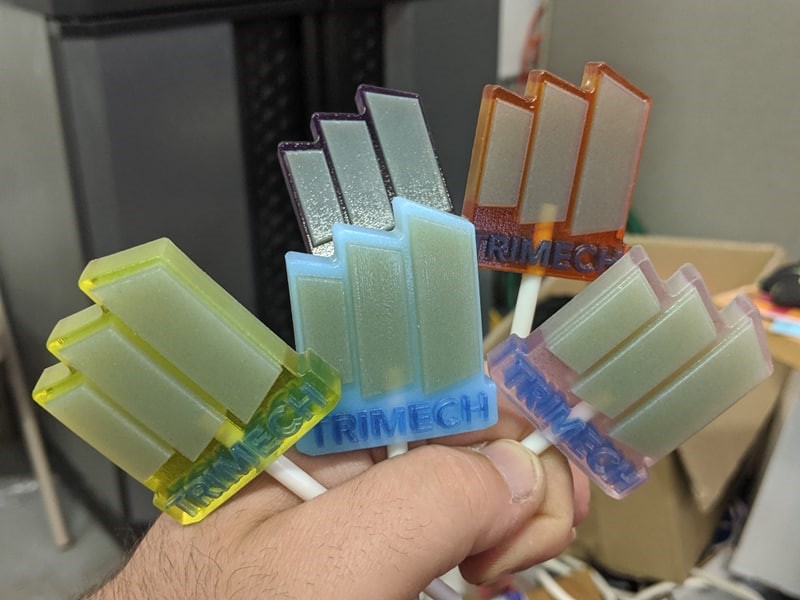 What Makes These Lollipops Special?

While I feel like I designed some pretty tasty looking TriMech lollipops, what really makes these parts special is the way that the J850 can run both variants at the same time, and by both variants I mean rigid semi-clear and shoreA 50 semi-clear full-color  sets of lollipops. In order to accomplish this, we’ll need to start with a full range of rigid colors, which requires VeroPureWhite, VeroBlack Plus, VeroMagentaV, VeroCyanV, and VeroYellowV to be loaded. To include some translucency to each lollipop we will need a clear component loaded as well. To achieve getting rigid and flexible semi-translucent lollipops, we’ll use both VeroClear and Agilus30 Clear, so instead of swapping between those two on the J750 and printing the different sets of mechanical properties over multiple builds, the J850 helps us save time and money by having all seven of those materials loaded at the same time. We can run any combination of rigid and flexible models that we want in a single build!

The Stratasys J-Series is a Treat 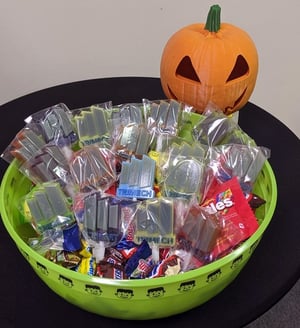 Both the J750 and J850 are fantastic 3D printers capable of doing some truly amazing things, many of which we’ve shown off over the past year in an array of articles. However, Stratasys has really stepped up its game with the J850 , because while it may look like we received an extra channel of materials to a machine that already had a ton of them, what we’ve really added is a massive number of additional mixing options with all of the other channels in the machine, which is HUGE! The J850 also offers us, is the ability to rarely have to swap materials unless we’re printing multiple rubber-like materials, or need to swap from one type of rubber-like material to another. The efficiency of this new machine, matched with the expanded range of material blending options you’re capable of printing in when you are able to do full-color, transparency, and rubber-like properties all at the same time, makes the new Stratasys J850 truly a one of a kind machine that’s a perfect fit for nearly all applications! Happy Halloween!

Ready to learn more detailed information about the new J835/J850? View our product page for all of the specifics and comparisons.