Scanning With the Artec Space Spider 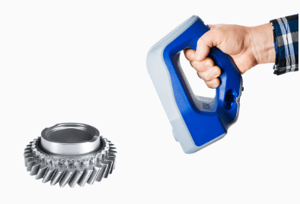 We decided to 3D print a coffee mug and spill to resemble spilled coffee. The coffee mug was scanned using the Artec Space Spider, which uses structured light to take full-color, high resolution 3D scan data, with a resolution of about 0.002” (50 microns). This was done as an alternative to modeling a mug from scratch or downloading a file of a coffee mug because it had to look just like the mug our co-worker uses. He’d never fall for the prank otherwise.

The spill was sketched on SOLIDWORKS with a cutout to allow the mug and the spill to mate to one another. Once the scan was processed using Geomagic for SOLIDWORKS, and the spill was created, it was uploaded to GrabCAD Print, then printed on one of our in-house Stratasys J750 PolyJet 3D printers. We elected to print the prank in two separate parts to allow the mug to be cleaned, wet sanded and clear coated to create the quintessential porcelain finish. 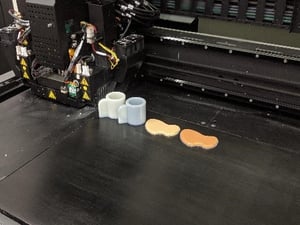 As shown in the image, initially the file was printed at 50% scale in multiple iterations to experiment with color and texture to create the most realistic prank possible. We also experimented with Photoshop and SOLIDWORKS Visualize to try and recreate a unique coffee texture in the software. Unable to find anything that emulated coffee, we turned to PANTONE color matching. After brewing a cup of joe in the office, we were able to match it to the GrabCAD Print color swatch. 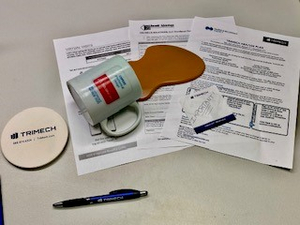 The Stratasys J750 can produce hyper-realistic parts because of its multi-material capabilities and high resolution. The J series can print in over 500,000 colors, including translucent color tints and Vero UltraClear, a rigid high clarity material with unparalleled transparency that provides a similar appearance to Poly methyl methacrylate (PMMA) and glass. The J series is also capable of producing multi-material and full textured parts in a single print job. The different printing modes allow the user to customize their printing experience. In high-speed and high-mix mode, users can expect a resolution of about 27-micron, while in high-quality mode, that number decreases to merely 14-micron, ensuring that even the finest of detail isn’t overlooked.

>> Learn more about the newest 3D printers in the J Series

The Stratasys J series printers are the world’s most advanced 3D printers, with unparalleled color and material options, for endless design concepts. With such great resolution, the J series can produce breathtaking realistic parts that look identical to the real thing. Whether you’re pranking your co-workers or printing prototypes for the big meeting, the Stratasys J series never disappoints.

There is a wide variety of materials available for PolyJet 3D printers. Now that you're more familiar with the J series, download our PolyJet white paper to learn more about the options available to you.